A huge fire shocked a Port Washington neighborhood, claiming one life after a residential garage exploded. 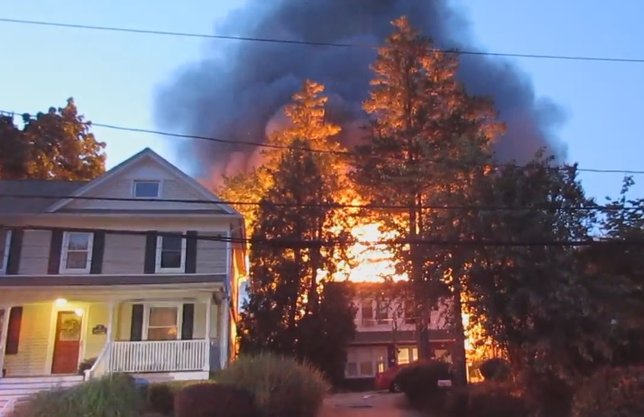 Update - 11:45 AM - According to the Public Information Office, Port Washington Police responded to a call to a home on Prospect Avenue, where a 39-year-old woman and 2-year-old child had evacuated their home due to a strong odor of gas. While police led the pair to safety, the detached garage exploded in flame. A Port Washington Police officer also suffered minor injuries in the incident.

Original Story - A house burst into flame at approximately 8:20 PM last night, August 5. The source of the fire is as yet unkown, but a garage in the rear of the home had reportedly exploded, sending fire throughout the rest of the house and spreading to other buildings in the Port Washington neighborhood.

In addition to leveling one home, the fire burned eight cars that were parked nearby.

One person has been confirmed dead in the explosion by Nassau County Fire Communications Supervisor Brian Tomeo, and four firefighters sustained minor injuries.

Homes in the area were evacuated while the fire raged, gas was shut off for the area, and a ten-block radius  around the home was closed off.

In all, 150 firefighters from 17 different fire departments were needed to extinguish the flames.

The victim’s identity has not yet been disclosed, and the fire remains under investigation.