A fuel truck heading east in Bellmore flipped over after striking a car, spilling fuel and setting a massive blaze to the area. 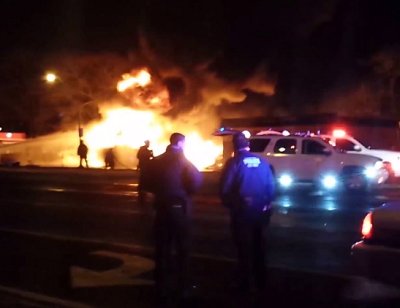 Update, 12/19/13 - Newbridge Road, which was closed between Sunrise Highway and Harrison Avenue following the fire, has been reopened.

Original Story from 12/18/13
The Nassau County Police Department has reported an auto accident which occurred around 11:52 PM on Tuesday, December 17. According to the report, a fuel truck was heading eastbound on Sunrise Highway in Bellmore when it struck the back of another vehicle stopped at a red light on Newbridge Road.

Upon impact, the truck flipped on its side and skidded forward before coming to a stop near Brevoort Place, spilling fuel along the way. The oil caught fire, setting a massive blaze to the area and damaging nearby property as well as parked cars. Nassau Police say that the drivers of both the tanker and the car it struck were rescued from their vehicles and taken to nearby hospitals. Details about their injuries are presently unknown, and the investigation is ongoing.

Just yards away from the accident, on the corner of Newbridge and Sunrise and directly across from Harley-Davidson of Nassau County, local residents shot video of the inferno.

The NCPD issued a statement at 11:13 AM Wednesday morning that all lanes of Sunrise Highway in Bellmore have been reopened.