WABA is celebrated annually during the first seven days of August. 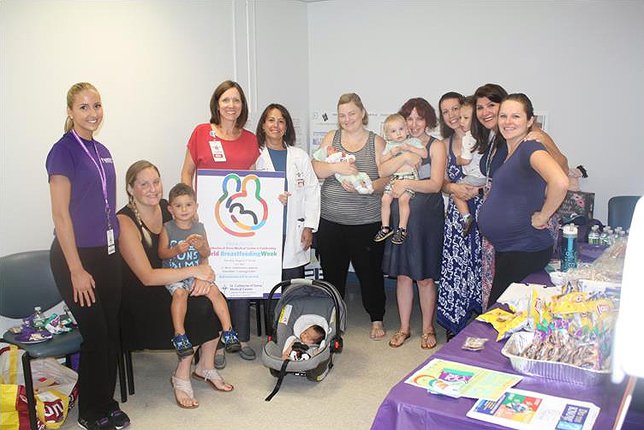 Smithtown, NY - August 1, 2017 - Expectant, new and season mothers joined in for the festivities to raise awareness about the core benefits of breastfeeding as St. Catherine of Siena Medical Center kicked off World Breastfeeding Week (WABA) on Tuesday, August 1, 2017. WABA is celebrated annually during the first seven days of August. And, since St. Catherine of Siena Medical Center is on the pathway to becoming a baby-friendly hospital, the Maternity Department proudly supports breastfeeding during the global awareness week, and every day throughout the year. The Maternity Department hosted an educational breastfeeding awareness lunch on Tuesday, August, 1st, at the medical center, which was open to all staff, visitors and community members.
Thanks to the Innocenti Declaration signed in 1990 during the commemorative month of August, by government policymakers, WHO, UNICEF and other supporting organizations—breastfeeding is not only protected and supported globally, but educationally promoted as well. The WHO sustains that “Breastfeeding is the best way to provide infants with the nutrients they need.” St. Catherine’s Director of Maternity Services Neila Hernandez, MSN, RN, WHNP-BC, along with Lactation/Perinatal Education Clinical Nurse Specialist Kristin Thayer, MSN, RN, CBC, IBCLC, were both in attendance and welcomed guests offering one-to-one education to all in attendance.
St. Catherine of Siena Maternity Department encourages and supports breastfeeding with free pre and post lactation classes.
For more information about St. Catherine of Siena Medical Center, please visit stcatherines.chsli.org or call (631) 870-3444.