In a move liable to frustrate many mobile users, Facebook is discontinuing its messaging service through its primary app. 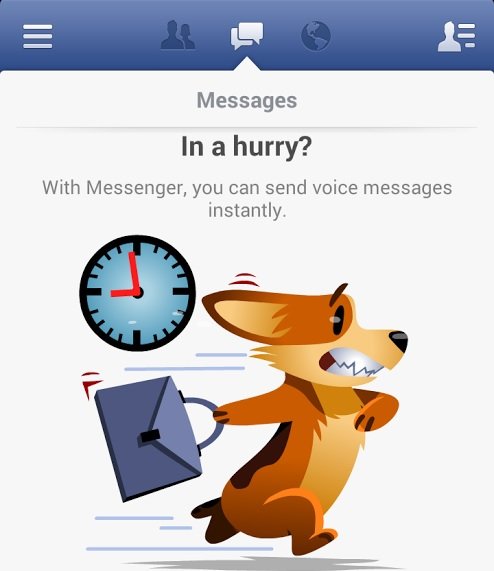 Facebook announced in April that it would be discontinuing chat services through its primary Android and iOS apps, forcing users who send private message through the social network to download the standalone Messenger app. The company began testing this new separation of services in a few European countries and evidently likes what it has seen, as the schism is now rolling out to the rest of the mobile world.

Much to the chagrin of those who prefer a more integrated user experience, Facebook began notifying users this week that the Messages tab in their existing primary app will soon cease to function. For many users a black bar now appears on the base of the Messages screen, bearing the text “Check out the New Messenger | It’s faster than ever.”

Others are receiving larger notifications, such as the one pictured, encouraging users to download the new app and highlighting additional features such as its capacity for voice messaging. Though an official blog post and coverage in the Facebook newsroom are conspicuously absent, the company did release the following statement via TechCrunch:

“In the next few days, we're continuing to notify more people that if they want to send and receive Facebook messages, they'll need to download the Messenger app. As we've said, our goal is to focus development efforts on making Messenger the best mobile messaging experience possible and avoid the confusion of having separate Facebook mobile messaging experiences. Messenger is used by more than 200 million people every month, and we'll keep working to make it an even more engaging way to connect with people.”

The move will certainly come as an irritant to those who prefer a more streamlined experience, but it is not entirely without merit. In addition to extra functions such as a split-screen “selfie” button, audio messaging, and recorded video sharing, Facebook reports that users who have already downloaded the Messenger app respond to messages roughly 20% faster than those who have not.