Suozzi: "This is a great victory for the people of Bethpage and surrounding areas, who, for over four decades have been dealing with this environmental crisis." 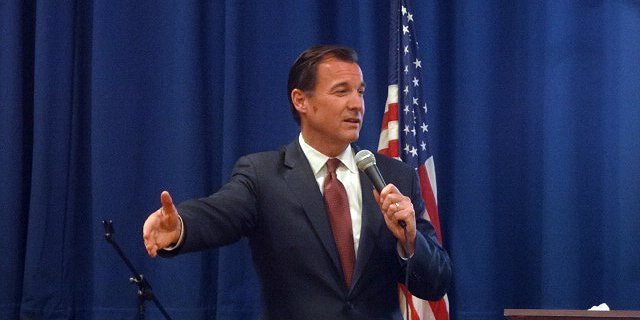 Behtpage, NY - July 28, 2017 - Today, an amendment introduced by Rep. Tom Suozzi (D – Long Island, Queens) which increased funding levels for the Navy/Grumman plume and other contaminated sites around the country by $42 million, passed the House of Representatives with bipartisan support. Congressman Pete King (R – Seaford) supported Suozzi’s efforts. Overall, 25 Republicans joined 189 Democrats in passing the amendment.
“This is a great victory for the people of Bethpage and surrounding areas, who, for over four decades have been dealing with this environmental crisis. The money in this bipartisan amendment will advance the cleanup and remediation efforts at the Navy/Grumman plume as well as other sites around the nation.
“When I came to Congress, I said I was ready to work with anyone – Republican or Democrat – if it meant getting things done and producing results. Today is a great example of what can happen when we set aside party differences and do what’s right for the people we serve. I wish to thank Rep. King for his partnership in this effort, and look forward to working with him in the future to continue our work on this critical issue.” said Congressman Suozzi.
“I am proud to work with Rep. Suozzi on this amendment. We must continue our efforts to ensure the safety of Bethpage and the surrounding areas. This funding will go a long way and I look forward to continuing to work with Rep. Suozzi to remediate this plume once and for all,” said Rep. King.
Congressman Suozzi previously had $42 million authorized as part of the National Defense Authorization Act (NDAA). Today’s amendment ensured that this $42 million increase will be appropriated by the House of Representatives.
In May, Congressman Suozzi brought together a meeting featuring all major stakeholders involved in confronting the challenges facing cleanup efforts of the Navy/Grumman Groundwater Plume, including the Navy, Northrup Grumman and the New York Department of Environmental Conservation (DEC). Rep. King attended the meeting. All stakeholders agreed to collaborate to obtain necessary approvals, permits and funding to accelerate the actual clean up.