Suozzi, King Call for Passage of $42 Million in Funding for Navy/Grumman Plume Cleanup

Souzzi, King: WWhile the water is safe to drink it is imperative that the site, and its effects on both the groundwater and soil, be dealt with immediately." 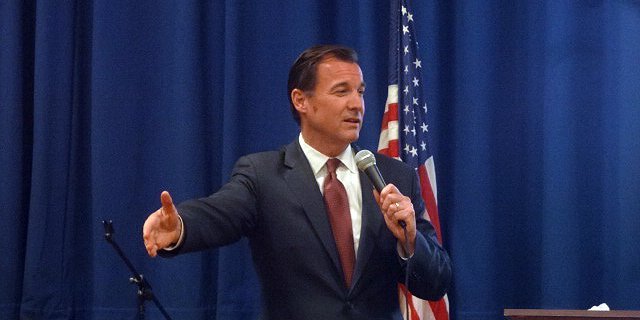 Bethpage, NY - July 7, 2017 - Today, Rep. Tom Suozzi (D – Long Island, Queens) and Rep. Pete King (R – Seaford) joined together urging the House to pass increased funding levels for cleanup efforts related to the Navy/Grumman plume. King applauded Suozzi’s efforts to secure bipartisan support of $30 million in the original National Defense Authorization Act (NDAA), and an additional $12 million in an amendment to the bill. This money would go to the Navy Environmental Restoration account, which funds remediation and cleanup efforts of the Navy/Grumman Plume and other sites around the country.
The bill also directs the Secretary of Defense and the Secretary of the Navy to submit a report on current funding levels’ impact on long-term cost as well as the feasibility of public-private partnerships to expedite cleanup of the plume and other similar sites. Though the water is safe to drink, Suozzi and King called on cleanup efforts to kick into high gear.
“For far too long – almost four decades – the people of Bethpage and surrounding areas have been dealing with this environmental crisis. While the water is safe to consume, it doesn’t change the fact that residents deserve to have this cleaned up once and for all. Congress needs to pass this funding increase so we can get this cleanup moving quickly and thoroughly,” said Congressman Suozzi.
“While the water is safe to drink it is imperative that the site, and its effects on both the groundwater and soil, be dealt with immediately. We must continue our efforts to advocate for tougher tests and measures to ensure the safety of that area and our families,” said Rep. King.
In April, Suozzi organized a meeting attended by King that brought together representatives from the Navy, Grumman, the DEC, Environmental Protection Agency, U.S. Geological Survey and several local water districts to come up with ideas on how to resolve this crisis. The meeting resulted in everyone agreeing to collaborate to obtain necessary approvals, permits and funding to accelerate the cleanup.