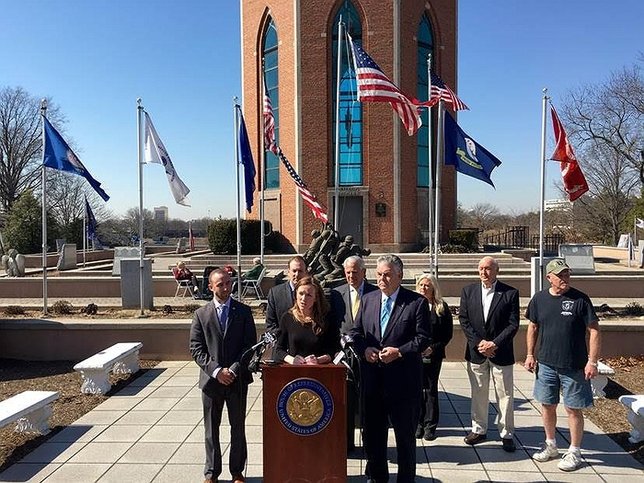 The Long Island congressional delegation spoke in support of the Fairness for Veterans Act.

East Meadow, NY - March 9, 2014 - U.S. Representatives Kathleen Rice (NY-04), Lee Zeldin (NY-01), Peter King (NY-02) and Steve Israel (NY-03) joined local veterans and advocates today at the Veterans Memorial in Eisenhower Park to call on Congress to pass H.R. 4683, the Fairness for Veterans Act, which was recently introduced in the House by Reps. Mike Coffman (R-CO) and Tim Walz (D-MN) and has been cosponsored by all four members of the Long Island congressional delegation. In recent years, tens of thousands of servicemembers suffering from combat-derived Post-Traumatic Stress Disorder (PTSD) and Traumatic Brain Injury (TBI) have received other-than-honorable discharges for minor misconduct and disciplinary issues such as tardiness or alcohol use – behaviors that can be directly linked to these mental health conditions. As a result, combat veterans with these “bad paper discharges” can be denied access to federally-funded benefits and health care services. The bipartisan Fairness for Veterans Act will make it easier for combat veterans to upgrade their discharge status by creating a presumption in their favor – so that if a combat veteran who has been diagnosed with PTSD or TBI appeals his or her discharge designation, military Discharge Review Boards (DRBs) must consider the appeal with the presumption that this condition contributed to the veteran’s discharge.
The Long Island congressional delegation members were joined today by Kris Goldsmith, an Iraq War veteran from Rice’s district who received a general discharge, one step below honorable, because of behavior related to his previously undiagnosed PTSD, and as a result, has been denied access to educational benefits through the Post-9/11 G.I. Bill. Goldsmith, along with fellow veterans of recent wars in Iraq and Afghanistan, has worked extensively to raise awareness about this issue and build support in Congress for the Fairness for Veterans Act.
The Fairness for Veterans Act has earned the support of several organizations, including Veterans of Foreign Wars (VFW), Military Officers Association of America (MOAA), Disabled American Veterans (DAV), Paralyzed Veterans of America (PVA), Vietnam Veterans of America (VVA), United Soldiers and Sailors of America, and Iraq and Afghanistan Veterans of America (IAVA). IAVA’s full letter of support is available here.
“It’s an absolute injustice that anyone who serves our country honorably in combat and suffers from a mental health condition as a result of that service would be other-than-honorably discharged and cut off from key benefits and health care services because of actions that were directly linked to that condition,” said Representative Kathleen Rice, a member of the House Committee on Veterans’ Affairs. “But we know that’s exactly what’s happened to tens of thousands of combat veterans in recent years who are now stuck with these bad paper discharges that can prohibit them from accessing mental health services through the VA, deny them federally-funded benefits and opportunities to advance their educations, and discourage employers from hiring them. The bipartisan Fairness for Veterans Act will make it easier for these combat veterans to appeal their discharge status, get the bad paper off their records, and get full access to the benefits and health care they’ve earned. I want to thank Kris Goldsmith, Congressmen Coffman and Walz, my fellow members from Long Island and all of our Democratic and Republican colleagues who worked together to move this bill forward, and I’ll keep working to make sure we get it passed as soon as possible with the strong bipartisan support it deserves.”
“This bill’s introduction in today’s Congress is proof that Congress works,” said Iraq War Veteran Kris Goldsmith. “Veterans are the one thing that Republicans and Democrats, even in these hyper-partisan times, can work together to support. The Fairness for Veterans Act is a bill that would help veterans who receive less than honorable discharges gain access to the benefits that they earned while serving in combat.”
Congressman Zeldin, member of the House Veterans Affairs Committee, said, “It is so important to fight for our veterans who have fought for us.  The Fairness for Veterans Act is absolutely essential for veterans with Post Traumatic Stress Disorder who were separated from military service with a less than honorable discharge.  We must ensure that our nation’s most vulnerable veterans receive the care, treatment and benefits they have both earned and deserve. I will continue working with my colleagues in the House to ensure passage of this critical bill."
“We owe it to the men and women who put themselves in harm’s way to ensure that they have the support and access to the very best in resources, treatment and outreach. The Fairness for Veterans Act will do just that and make sure our veterans are treated fairly and afforded every opportunity,” said Representative Peter King.
“Our veterans should never be denied the benefits they deserve to cover mental health care needed after their service.  When our men and women come home with invisible wounds of war, we need to support them and help get them back on their feet. I am proud to stand with my Long Island colleagues to support this legislation and will continue to fight to deliver for New York veterans and their families,” said Representative Steve Israel.
The full text of H.R. 4683, the Fairness for Veterans Act, is available here.