Comet NEOWISE Visits Northeast: How to View it on Long Island 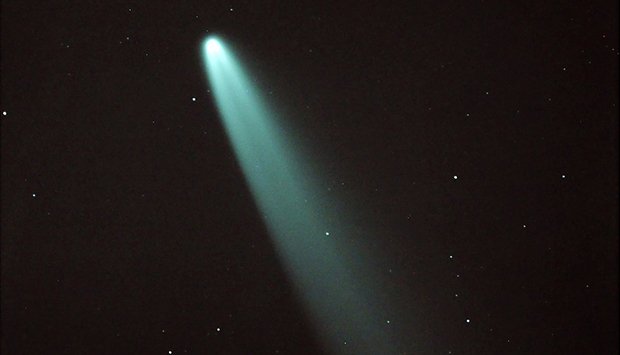 Not since Hale Bopp, aka The Great Comet of 1997, has a heavenly visitor of this type caused such a stir.

Sky watchers are waking up early in the morning to catch a glimpse (though some are reporting disappointing results amid the cloudy skies over the last couple of days) of comet NEOWISE.

Reaching what scientists call perihelion - its closest approach to the sun - NEOWISE is ricocheting back out to the furthest reaches of the solar system. But this kiss from our sun is what causes the comet’s dust tail to extend out, making for such a majestic view.

Heat and solar wind, according to NASA, is what creates the glowing tail of a comet as dust and gases are blasted off the surface of the icy object - space is usually very cold.

The tail streams out from the comet away from the sun - meaning it’s not flying behind the comet’s trajectory like Superman’s cape but blasting off the surface pointing away from the sun. (Remember, space is a vacuum so there is no air resistance like flying through Earth’s atmosphere.)

Where and When to View NEOWISE

But, like the early bird, you have to rise before dawn to catch this worm. To see NEOWISE in all its splendor right now, you probably need to be out about an hour and a half before sunrise. That puts you in place at around 4am - or even earlier.

Astronomy buffs have reported good sightings from Sunken Meadow Park to Cutchogue looking to the northeast. The comet appears in the sky as if head-down (that’s with the tail streaming up from the horizon ahead of the sunrise.)

You will want to be where you have a wide, unobstructed view of the horizon with as little light polution as possible - a beach is a good place to go anytime but definitely a prefered spot for viewing NEOWISE.

NEOWISE, the comet, was named for the Near-Earth Object Wide-Field Infrared Survey Explorer (NEOWISE) space telescope, which spotted the comet in March, according to Scientific American. The comet is also known by its designation, C/2020 F3, clearly not as fun to say.

The best morning views are right now. Space.com reports that the three days from July 11- 13 will be prime time to see NEOWISE in the am. After that, the comet dips lower in the sky daily from our perspective until it is lost below the horizon.

Although, if you’re not a morning person all is not lost!

You should be able to see the comet in the evening after sunset. Space.com estimated that the best evening views will be between July 14-19.

Skywatchers haven’t taken to early rising to view the comet merely to punish themselves. The fear was that the comet would lose its splendorous tail before it could be viewed in the evening sky later in the month.

If NEOWISE keeps its tail and is visible in the evening locals will be in for a treat as the waning moon will provide for even darker skies making visibility much better.