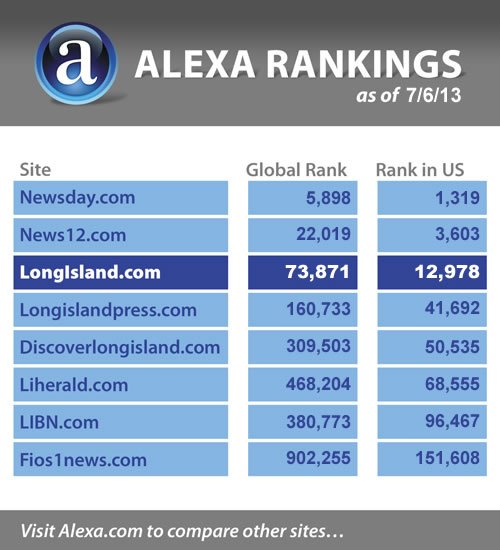 Kings Park, NY - July 8th, 2013 - After a year’s worth of site-wide improvements and upgrades, LongIsland.com’s Alexa.com ranking has climbed drastically, surpassing the majority of similarly geo-targeted sites in the process. Alexa.com Rankings are determined by comparing how well a website is performing in comparison to other sites on the web. For almost two decades, Alexa.com has been the premier online tool for tracking the success and popularity of websites.

Since re-launching LongIsland.com last year, the Long Island Media team has continued to expand its resources, including its wildly popular Things to Do Section, helpful resources and guides, and its robust Business Directory, which locals turn to for information about local businesses in their area. After over a year of hard work put into the site’s content expansions and updates, the LongIsland.com team is pleased to see their Alexa.com ranking rise in tandem with their efforts.  Cait Russell, Creative Director, is quoted as saying “We’ve put together a site that is truly a valuable resource for Long Islanders, and something to be proud of – it’s exciting to see such an overwhelmingly positive response to our content.” As compared to other targeted Long Island websites, LongIsland.com Ranks #3, according to Alexa.com – trailing only behind Newsday and News 12, which also cover additional regions of New York (see: Accompanying Graphic for Reference).

Originally launched in 1996, LongIsland.com was founded with the purpose of providing locals with the quality local  information and resources – something that it has continues to do ever since its original launch. When Long Island Media  acquired the site, the company decided that it was time to take it to the next level, and after a complete site makeover, their creative team has continued to aggressively expand upon the resources that have made LongIsland.com popular with locals for the better part of two decades.  This continued effort has proven to be successful, as the site continues to attract more visitors, and in turn, continue to climb in the Alexa.com rankings. Presently, LongIsland.com ranks at 12,978 in the US, according to Alexa.com, and the site continually rises in the rankings, as it attracts more visitors daily (see: Accompanying Graphic for Reference).

LongIsland.com’s high ranking from Alexa.com is just further proof of how vital that site has become since it was reinvigorated and re-imagined by the Long Island Media team.