The NYS Police and NYS Parks Police were joined by the GTSC in delivering the message encouraging state park visitors to buckle up for safety. 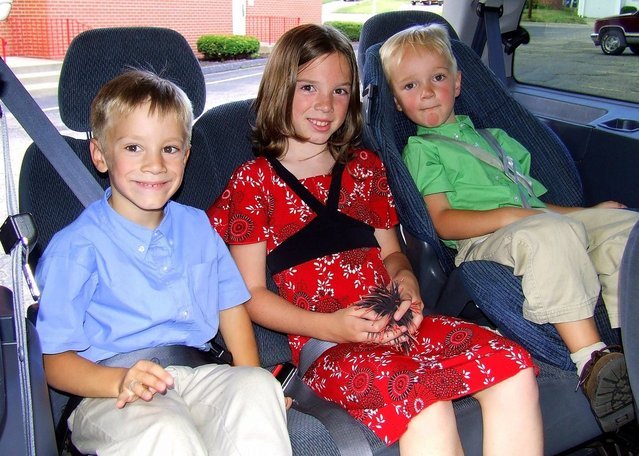 Despite the overall success of the recent “Click it or Ticket” and “Buckle Up New York” campaigns, a subset of non-compliant motorists still exists.

This initiative partners the New York State Police and the New York State Park Police in an enforcement and educational campaign to encourage visiting motorists and their passengers to properly buckle-up their seatbelts, and teach the importance of properly securing our youngest visitors in approved child safety seats.

Despite the overall success of the recent “Click it or Ticket” and “Buckle Up New York” campaigns, a subset of non-compliant motorists still exists.  The State Police and Park Police have noticed a disturbing trend of lower seatbelt and child restraint use in proximity to state parks located outside large urban areas. It is the goal of this partnership to increase compliance and raise awareness of this issue with this joint summer parks enforcement initiative.

Since New York State became the first state in the nation to enact a primary seatbelt law, effective January 1, 1985, countless lives have been saved.  The seatbelt compliance rate has steadily increased, reaching 92 percent in 2015. However, motor vehicle crashes are the leading cause of death for children ages one through 13.  Based on U.S. Department of Transportation and National Highway Transportation Safety Administration (NHTSA) crash data in 2011, on average, nearly two children (age 13 and younger in a passenger vehicle) were killed and 338 were injured each day. This fatality rate could be reduced by about half if correct child safety seats were always used.

New York State Police Superintendent George P. Beach II said, “As the summer travel season continues, the State Police, State Parks Police and our partners strongly encourage the proper use of seat belts and child safety seats in motor vehicles. This is about protecting the smallest New Yorkers, our children. By simply buckling-up, we can reduce severe injuries and deaths in motor vehicle crashes. We will continue to work diligently to promote proper seatbelt use and compliance."

Terri Egan, Executive Deputy Commissioner of the New York State Department of Motor Vehicles and Acting Chair of the Governor's Traffic Safety Committee said, “New York is home to a world-class system of state parks extending from the tip of Long Island to the eastern shores of Lake Erie, eclipsing 65 million visits last year alone. People clamor to visit our state parks during the summertime, making it more important than ever to ensure that we are all doing our part to keep each other safe by buckling up and obeying vehicle and traffic laws. There are simple rules to follow and they save thousands of lives every year: one passenger per seat, and everyone is in the proper child passenger safety seat and others wear the proper seat belt. I encourage all New Yorkers to have a safe, happy, and healthy summer in our state parks.”

Charles Cuvelier, Chief of Law Enforcement, Security and Emergency Services for the National Park Service said, "The National Park Service is proud to participate in “Buckle up New York”. We want our visitors and local communities to have an enjoyable and safe visit in our national parks this summer.  Wearing a seatbelt and using child restraint systems while driving in our national parks is one of the most effective things you can do to protect yourself in a crash and it’s the law. Towards Zero! is a combined effort using education and enforcement to meet our goal of zero traffic-related deaths is possible if you buckle up".

This event coincides with one of the peak times that visitors travel to state parks throughout New York State, and our goal is for motorists and their families to arrive and depart safely.   Increasing seatbelt use is one of the most effective ways to reduce crash related injuries and fatalities. Ensuring motorists adhere to proper child restraint laws will, no doubt, protect the lives of many that cannot speak for themselves.

During the 2015 BUNY in the Parks campaign, State Police and State Parks Police issued more than 2,000 tickets. More than 1,200 of those tickets were for improper child restraints and nearly 500 for adult seat belt violations.