Both of NY’s baseball teams earned comeback wins last night, and the Yanks reached a pair of benchmarks in the process. 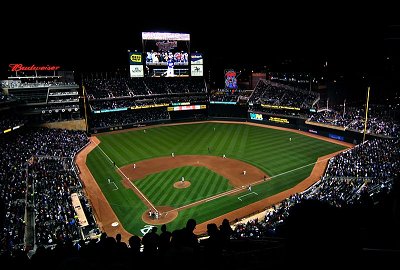 The Yankees entered Saturday’s game against the Orioles hoping to snap a 3-game losing streak. That prospect looked pretty unlikely when David Phelps allowed three straight singles (including an RBI) in the bottom of the first, then gave up a 3-run homer to Chris Davis. Phelps retired Baltimore in order in the second, but gave up 5 more runs in the third before being replaced by Ivan Nova who would finish out the game.

Zolio Almonte drove in the Yanks’ first run with a sacrifice fly in the sixth, and Robinson Cano came home on an error to make it 8-2; Chris Davis wiped away what little progress New York made with a 2-run homer in the bottom half of the inning. Brett Gardner doubled in a run in the ninth, but it mattered little as the Orioles won 11-3.

Baltimore continued to flex its muscle early in Sunday’s close to the series, starting with a Manny Machado homerun off Hiroki Kuroda in the first inning. Brett Gardner helped tie the game by working a bases-loaded walk in the second only for Davis to hit yet another homer in the bottom frame to put the Orioles back on top. A Nate McLouth blast in the third rounded out the trio of early homeruns for Baltimore, putting New York down 3-1.

Robinson Cano brought the Yankees back within 1 with a homerun of his own in the sixth inning, but that was the last piece of offense his team could find. Brian Roberts’ sacrifice in the seventh gave the Orioles a 4-2 lead which held as they swept the Yankees.

Having now lost 5 straight games, New York was hoping for a strong showing from Andy Pettitte as they travelled to Minnesota last night for their last road series before the All Star break. Things were looking fairly high up when Robinson Cano rocketed a solo shot in the first inning, but Pettitte gave up 3 runs in the bottom half. Cano bailed him out when his second homer in as many at-bats brought Jason Nix home to tie the game at 3 apiece in the third inning.

Andy looked like he would take full advantage of the opportunity as he settled down enough to collect his 1958th strikeout in a Yankees uniform, earning the top spot in team history; however, the outing would end on a sour note for him as he gave up a go-ahead homerun in the sixth.

Cano would again help prevent a loss from being credited to Pettitte in the eighth, starting with a leadoff double. An Ichiro Suzuki bunt sent him to third, and Ichiro’s speed coupled with an inaccurate throw brought him safely to first. A failed pickoff attempt got away from the first baseman, allowing Cano to score and Ichiro to reach third. Almonte singled Suzuki home to put the Yankees up 5-4, and would later come home himself on a Chris Stewart groundout.

With a two run lead in the top of the ninth Gardner, Nix, and Cano reached safely before Minnesota could find their first out. Travis Hafner and Almonte both hit RBI singles, Stewart worked a bases-loaded work, and Hafner ran home on a passed ball to turn what had recently been a losing battle for the Yanks into a 10-4 lead. Despite the large lead, Mariano Rivera came on to close out the game—which he did in his usual fashion—as the 5-game losing streak afforded him little time to stay active.

The victory marked more than the end of a prolonged slump and Andy Pettitte’s passing of Whitey Ford; it was also the 600th win in Joe Girardi’s career as a manger. The Yankees will play the second of this four game set at 8:10 PM tonight.

After blowing another great start from Matt Harvey in the series opener against the Nationals, the Mets made sure not to squander a strong outing from Dillon Gee on Saturday. Gee did give up the first run of the game in the top of the fourth, but an RBI single from John Buck tied the game in the bottom of the inning.

Daniel Murphy came home in the fifth on a pair of errors, and Kirk Nieuwenhuis added a sacrifice fly to make it 3-1. Eric Young followed suit with a sacrifice in the sixth, and Marlon Byrd singled in Murphy to put New York ahead 5-1. That score held as the bullpen took over in the seventh and Gee improved to 6-7 on the year.

Following two days of solid starts, Mets fans had good reason to feel optimistic when the rookie Zack Wheeler took the mound on Sunday. Unfortunately, Wheeler gave what was far and away the worst of his three Major League performances, allowing 4 runs in the second inning and a 5th in the third. Wheeler was taken out in the middle of the fifth, and though the bullpen turned in a couple scoreless innings the staff gave up 6 runs in the eighth and another 2 in the ninth. John Buck hit a 2-run homer in the last frame of the game, but there was no chance of a rally as Washington thrashed the Mets 13-2.

The Mets kicked off a four game set with the Diamondbacks last night, though the game did not start well for New York. Shaun Marcum gave up a 2-run homer in the top of the first, and an RBI single in the second to put Arizona up 3-0.  David Wright began to turn the tide in the seventh, however, with an RBI single that scored Young. Young’s double in the eighth brought Omar Quintanilla home, and Josh Satin singled in the tying run in the ninth inning.

Extras went scoreless for three innings before Cody Ross hit a leadoff homerun in the top of the 13th to put the Diamondbacks ahead 4-3, but the Mets would not be so easily denied. Following a Satin double and Buck walk, Matt Harvey came on to pinch hit for David Aardsma. He successfully advanced the runners with a sacrifice bunt, and Quintanilla was intentionally walked to load the bases with two outs. Andrew Brown hit two foul balls before smacking a line drive to score Satin and Buck, giving New York a 5-4 walk-off win.

The Mets will play Arizona again at 7:10 PM tonight.