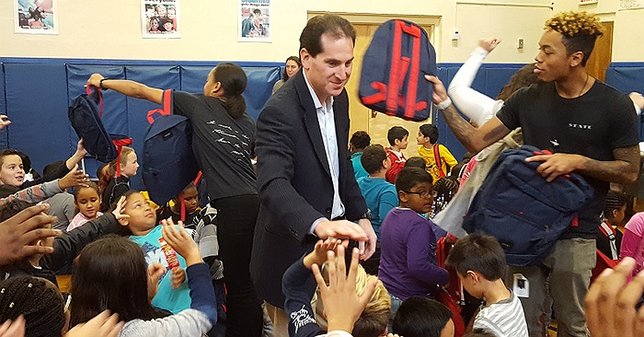 Washington, DC - June 19, 2016 - U.S. Senator Charles E. Schumer today called on Congress to boost federal funding for Department of Justice (DOJ) programs that prevent hate crimes and discrimination. Schumer today said that the fatal Orlando attack on a gay nightclub underscores the threats faced by the whole LGBT community across the nation, and here in New York, and requires an adequate response to protect all citizens against terror and hate.

“All Americans—regardless of gender identity, sexual orientation, religion or race---should be kept safe from discrimination and hate and violence,” said U.S. Senator Charles E. Schumer. “New York’s melting pot has unfortunately not escaped the rash of hate crimes targeting several communities like our LGBT family. Our local law enforcement agents must be equipped with the federal resources needed to prevent, investigate and prosecute hate crimes and that’s why I’m calling on Congress to pass this amendment— because it is the first duty of government to protect its citizens from fear and hate and violence.”

Schumer said Congress must pass a new Department of Justice amendment he is pushing so that local law enforcement agencies in New York have access to the resources needed to keep all New Yorkers safe by preventing potential prejudiced attacks as well as investigating and prosecuting federal hate crimes.

In response to the bias-motivated attacks against the LGBT and Latino communities in Orlando, U.S. Senators Tammy Baldwin (D-WI), Barbara Mikulski (D-MD) and Mazie K. Hirono (D-HI) unveiled a new amendment that would ensure the DOJ has the necessary resources to prevent, investigate and prosecute potential hate crimes throughout the country. Specifically, under the proposal, the DOJ’s Civil Rights Division (CRT) and Community Relations Service (CRS) would be allocated an additional $30 million and $11 million respectfully.

Schumer today said that New York City has unfortunately not escaped the wave of hate crimes targeting the LGBT community. A New York man last year was arrested last year for attacking Larry and Daniel Lennox-Choate, the first gay couple to be married at West Point Military Academy. In addition, this past March, Elliot Morales was convicted of murder as a hate crime for killing Mark Carson, a gay man, in Manhattan. Morales was sentences 40 years to life in prison. In April , James Dixon was sentenced to 12 years in prison after murdering Islan Nettles, a transgender woman.

A full summary of the amendment Schumer is pushing can be found below: