Earlier this evening, Governor Andrew M. Cuomo delivered remarks at a vigil for victims of the Orlando terror attack.

New York, NY - June 13, 2016 - Earlier this evening, Governor Andrew M. Cuomo delivered remarks at a vigil for victims of the Orlando terror attack. The vigil was held at the Stonewall Inn in New York City. 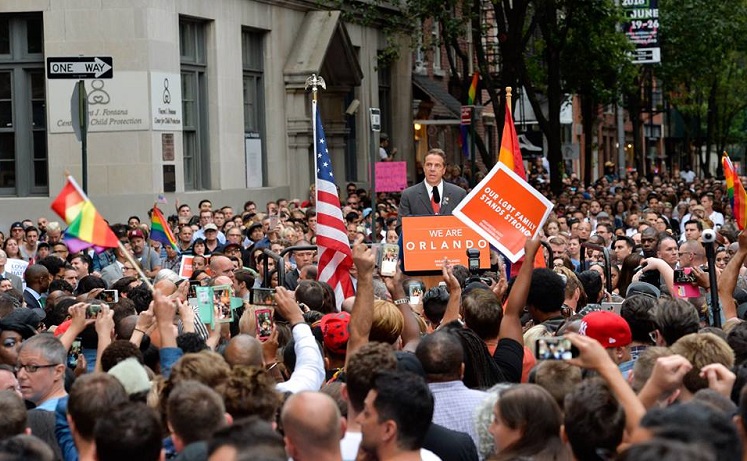 Governor Cuomo has also directed New York State law enforcement to remain vigilant in the wake of this senseless attack and has increased security at high-profile locations across the state. Governor Cuomo’s statement and more information can be found here.

A rush transcript of the Governor’s remarks delivered at the vigil is below:

Thank you. Thank you. First, to Eunic Ortiz and all the people who worked so long and hard to organize today. Let’s give them a round of applause. This is a beautiful site. This is New York at its best – coming together to speak with one voice. Give yourselves a round of applause. You know, the Orlando massacre, I’m sure, has stirred a cauldron of emotions in all of us. The shock, the pain. Over 100 people killed or injured. The senselessness of it is staggering. The frustration at a society that would allow a mad man to buy an assault weapon has gone on for too long. We went through it at Sandy Hook. 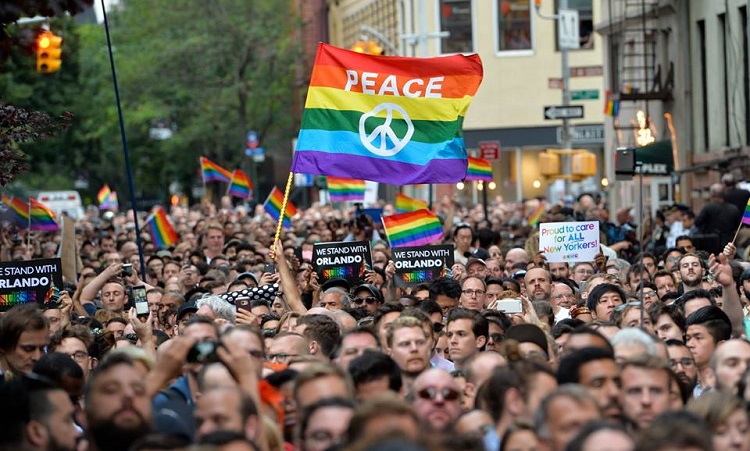 How many people have to die before this federal government comes to its senses? We had Columbine. We had Virginia Tech. We had Sandy Hook. We had San Bernardino. We had Aurora, Colorado. When does it stop? We passed – we passed gun control in this state. We outlawed assault weapons in this state. We know it can be done. We know – we know it can be done. We know it’s controversial. We know it takes political courage, but we’re saying to our federal government: We want that political courage shown and don’t you come home until you pass sensible gun control and it stops and it stops now.

It does us no good as a state to outlaw an assault weapon when someone can get in a car and drive three hours to another state and buy it and drive it over our border. Until we have a national policy, none of us are safe and this is an American curse. It is not an international curse and we should learn and we should move forward.

But my friends, its worse. This was not just a senseless act. There was literally a method to the madness. It targeted the LGBT community and that is vile and that is evil and that is hatred and we must all stand up with one voice and condemn this activity as one society. Now the question is, with all this emotion, what do we do with it? What do we do with it? And what I say to you tonight is let’s take that emotion and let’s make it a force for good and let’s make it a positive force. And let’s take that emotion and let’s rise up and let’s rise above and let’s reject the ignorance and reject the bigotry and don’t stoop to their level and let’s forge a community that is actually strengthened by this attack and more unified to achieving justice for all.

“New York is not just another state,” he says as an arrogant New Yorker. New York is different and New York is special and when New York talks and New York speaks and New York leads, the other states take notice. Let's say tonight with this emotion we feel, this is the day that that the federal government must promise us that they will pass sensible gun control because enough is enough. We say to our enemies tonight: you haven't caused us fear, you have caused us to be more unified than ever before and let's pledge tonight to have the largest Pride Parade in history and have the largest turnout and I will be with you shoulder to shoulder marching and let's show you our response and invite every New Yorker to the largest and the safest Pride Parade in history.

Let us do what we did after 9/11 and let us build back a monument better than ever before. Let us make Stonewall not just a national monument but an international symbol for all to know that freedom started here in 1969 in the Stonewall and it moved this state and this state moved this nation and we will not stop until we have freedom for all. And, my friends, let us recommit ourselves tonight as we are here. Let us join hands – one with the other – and let us say to the world: “We believe in New York. We are all in this together. We are all one. We are a family of New Yorkers. We are a community and there is a cord that connects you to you to you to you. Maybe you can’t see it. Maybe it’s an invisible cord but it is there and it connects us.”

The cord weaves a fabric and in New York, we believe when one of us is raised we are all raised, and when one of us is lowered we are all lowered. We believe in New York that an attack on any of us is an attack on all of us and that is what you have done. We tell our enemies, “We do not fear you, we pity you. You have not struck terror into our hearts, but you have unified our hearts.” New York promises Orlando and every community across this globe that we stand more united today, more committed today, to the fight for individual freedom than ever before. No one is going to tell us who we are or how to live our lives, or the person we were meant to be. That’s what New York is all about and we promised to rededicate ourselves to the cause of freedom, together as one. God bless you.