CDC: Stay Safe In and Around Swimming Pools

Splashing in a swimming pool is a sure way to have summer fun. But it's important to make safety a priority to protect children and others in and around the water. 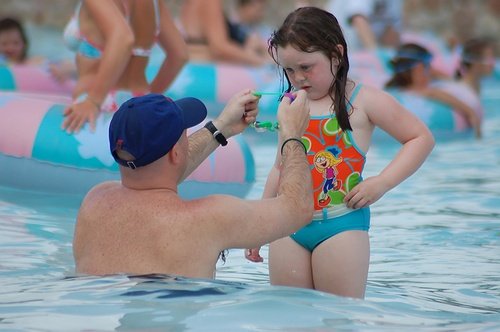 For every child less than 15 years old who dies from drowning in a pool, another 10 receive emergency department care for nonfatal submersion injuries.3 Nonfatal drowning can cause brain damage that may result in long-term disabilities including memory problems, learning disabilities, and permanent loss of basic functions. The good news is that drowning can be prevented.

While rates of fatal drowning in a swimming pool vary with age, gender, and race, the highest rates are among children ages 1 to 4. Males are at higher risk than females at all ages.1

Other at-risk groups include African Americans, American Indians, and Alaskan Natives.1 African Americans between the ages of 5 and 19 are six times as likely to fatally drown in pools as whites or Hispanics.1 Factors such as access to and use of swimming pools and lessons, and a combination of social and cultural issues, may contribute to the racial differences in fatal drowning rates.4 If rates could be determined by actual participation in water-related activities, disparity in minorities fatal drowning rates compared to whites would be much greater.4

A swimming pool can be a great source of family fun and fitness. But it's important to make safety a priority to protect children and others in and around the water. Some of the most effective ways to prevent drowning include four-sided fencing, swimming lessons, life jackets, and supervision/lifeguarding. Knowing CPR can also save the life of someone who drowns. For best protection, combine several safety measures to most effectively reduce drowning risks.

Appropriate pool fencing significantly reduces the risk of drowning.2 More than half of all swimming pool drownings among young children could be prevented by four-sided fencing that completely separates the pool from the house and the yard. The fence should be at least 4 feet high, and have self-closing and self-latching gates that open outward, with latches that are out of the reach of children.

Portable or inflatable above-ground pools have become increasingly popular, but these pools carry a significant risk of drowning, particularly in boys under the age of 5.5 Because of the flexibility of these pools, the side of the pool can collapse and cause someone to fall into the water and drown. The same safety precautions to prevent access to the water should be followed as for in-ground pools, including four-sided fencing.

Even in a pool, inexperienced swimmers and young children may benefit from wearing properly fitted life jackets.6 Do not use air-filled or foam toys, such as "water wings," "noodles," or inner-tubes, in place of life jackets for flotation support. These are toys and are not designed to keep swimmers safe.

Children should never be in or around a pool alone. Barriers to pool access should be used to help prevent young children from gaining access to the pool area without caregivers' awareness. Four-sided isolation fencing, door locks, gate locks, and alarms that are triggered when someone enters the water are examples of barriers. Most young children who drowned in pools were last seen in the home, had been out of sight less than five minutes, and were in the care of one or both parents at the time.8

Safety while in or around the pool

Never leave a small child alone or in the care of another child while in the pool or other water source, even if the child has had formal swimming lessons. When a young child or inexperienced swimmer is in or around water, always be within arm's length. Adults who are supervising children in the pool should not be distracted by activities such as reading, playing cards, texting or talking on the phone, or mowing the lawn. Drowning can happen very quickly and quietly.

Supervision is important even when there are lifeguards at the pool. While lifeguards enhance safety, their ability to safeguard swimmers has limitations. It's often another swimmer or bystander who first notices that someone has drowned.9

CPR performed by bystanders has been shown to improve outcomes in drowning victims.10 For example, starting CPR immediately, rather than waiting for emergency personnel, can help reduce the chance of brain damage.

The following resources offer information that can help you stay safe in the water: