An expedited cleanup of the former Gulf Oil Terminal site has been ordered. 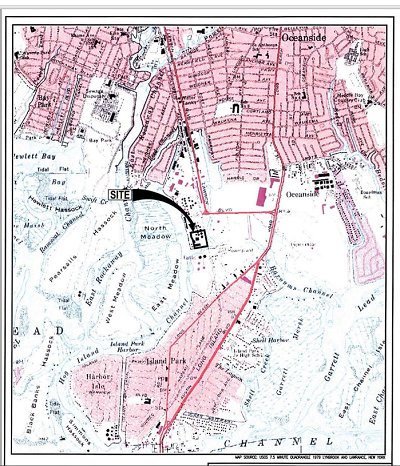 The site is listed as a Class "2" site in the State Registry of Inactive Hazardous Waste Sites (list of State Superfund sites). A Class 2 site represents a significant threat to public health or the environment; action is required.

Work at the site will commence this summer.

An IRM is a cleanup activity that may be performed when a source of contamination or exposure pathway (the way in which a person may contact contamination) can be effectively addressed without extensive investigation and evaluation.

The IRM work plan describes the proposed cleanup activities that include:

2. Replace soil excavated as they are removed with a cement-bentonite slurry to maintain

4. Continuing the Groundwater Monitoring activities in conjuction with the IRM.

Summary of the Investigation

The former Vapor Recovery Unit (VRU) represented the principle source area of concern at this Site. The VRU had used TCE as a heat exchange fluid and was the source of Chlorinated VOC impacted in the soil and groundwater.

Upon completion of the work, an Investigation Report and a Construction Completion Report will be prepared. These will present investigation results and document the activities that were performed.

Investigation of the site will continue during and following this IRM. Additional cleanup activities

Site Features: The site is currently a vacant lot.

Current Zoning/Use: Current use and zoning of the land is for industrial purposes.

containing fuel oil (one 550-gallon, one 1,000-gallon and one 5,000-gallon); one 1,000-gallon UST containing waste oil; a loading rack; a retention pond; a maintenance garage; and an office complex were previously located on the Gulf parcel. Four of the nine large ASTs were demolished prior to 2000, with the remaining five large ASTs reportedly demolished in 2003. The two 550-gallon ASTs containing fuel oil for the maintenance garage and the office building were demolished in 2005.

The site has undergone extensive investigation and remediation since the 1990s under NYSDEC oversight (Spill No. 92-03883). In January 2007, the NYSDEC accepted Lowe’s Home Centers, Inc. (Lowe’s) as a volunteer under the Brownfield Cleanup Program (BCP) – Site No. C130165. Following the decision by Lowe’s to withdraw from the BCP in 2009; the NYSDEC transferred the site into the Hazardous Waste Program (State Superfund Site).

Historical soil and groundwater investigations indicate soil impacted with volatile organic compounds (VOCs) at concentrations above NYSDEC Soil Cleanup Objectives (SCOs) have been observed primarily in the western and southern portions of the site. VOC-impacts in groundwater have been observed predominantly in the northeastern, central and southern portions of the site. Chlorinated VOCs (CVOCs), including trichloroethene (TCE), cis-1, 2-dichlorethene (cis-1, 2-DCE), trans-1, 2-dichloroethene (trans-1, 2-DCE) and vinyl chloride (VC) were also detected in soil and groundwater at the site in proximity to the former Vapor Recovery Unit.