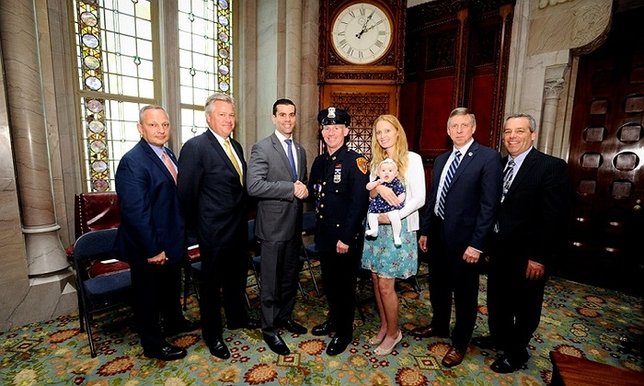 Suffolk County Police Officer Mark L. Collins was honored for his heroism in the line of duty.

Huntington Station, NY - June 10, 2016 - Senator Venditto (R-C-I, Massapequa) sponsored a legislative resolution, which was passed by the New York State Senate, honoring Officer Mark L. Collins for his heroic actions while in the line of duty.  With passage of the legislative resolution, his courage and dedication to protecting the citizens in our communities will forever be part of the New York State Senate’s official record.

Shortly after midnight on March 12, 2015, while on patrol in Huntington Station, Officer Collins and his partner pulled over a vehicle for a traffic violation. Noticing that one of the occupants in the vehicle was a gang member with a long history of violence; Officer Collins attempted to make an arrest when the suspect fled upon exiting the vehicle.  Officer Collins, while actively detaining the suspect, was shot in the neck and hip.  Officer Collins miraculously survived this horrific attack and the suspect was later tracked down by officers and police dogs.

“I was honored to present a resolution to Officer Mark Collins.  His heroism in the line of duty is truly an inspiration to us all and we are blessed that he is still here with us.  We know that the men and women who are our uniformed officers in New York State put their lives on the line every day.  I want to thank Officer Collins for his continued service and I am privileged to sponsor this resolution”, said Senator Venditto.