The Police Diversity Committee will assist with the implementation of County police reform recruitment and diversity initiatives. 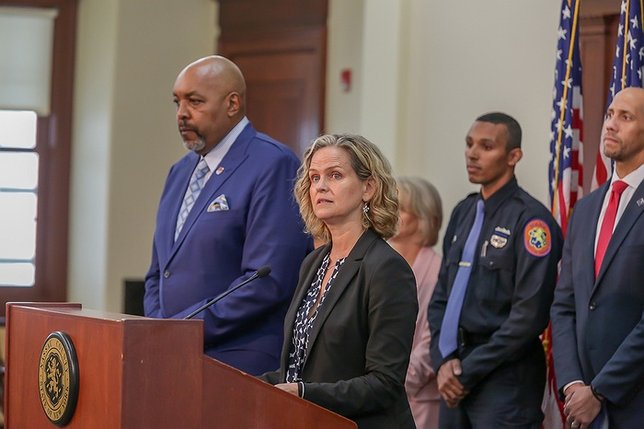 Nassau County Executive Laura Curran has officially announced the formation of the Nassau County Police Diversity Committee, which will seek to improve diversity in County police hiring through the three stages of the hiring process: recruitment, testing, and hiring. The Police Diversity Committee will assist with the implementation of County police reform recruitment and diversity initiatives. County Executive Curran is seeking recommendations from the Committee ahead of the next Police Officer Civil Service exam, which will likely be scheduled in 2022.
Nassau’s Police Diversity Committee will be chaired by Deputy Director for Diversity and Engagement, Bishop Lionel Harvey, and will include the following members:
“My Administration is committed to increasing diversity in Nassau’s police force and will advocate for the changes we need to accomplish this goal. I thank the members of the Nassau County Police Diversity Committee for their commitment to police reform,” said Nassau County Executive Laura Curran.
The Nassau County Police Diversity Committee is being formed to improve diversity in police hiring. As part of the County’s ongoing efforts to increase diversity in its police force, the Police Diversity Committee will address:
Recruitment: Focusing on new methods and strategies to reach more potential police officers from minority communities.
Testing: Working with minority candidates to prepare for each facet of the police examination and hiring process in partnership with NCC where appropriate.
Training: Supporting minority candidates in the Nassau County Training and Intelligence Center as they complete rigorous academic and physical training.
“This is a great opportunity for the County to take a concentrated look at the hiring practices of the Nassau County Police Department. I am committed and proud to take a leadership role in helping shape the diversity of our police in all aspects, including recruitment, training, testing and the all-important mentorship of young recruits of color,” said Bishop Lionel Harvey, Chair of the Nassau County Police Diversity Committee.
"It is imperative to the overall success of recruitment and retention of Police Officers of Color in Nassau County that the community has a voice at the table where strategies will be developed, implemented and monitored for effectiveness. The Urban League of Long Island will serve the will of diverse community members as we work towards an inclusive police force in Nassau County,” said Theresa Sanders, President of the Urban League of Long Island.
“I am proud to have been nominated by the County Executive to serve on this important Police Diversity Committee. The task of ensuring that the police force reflect the community served is the overarching goal of this committee. Recruits, particularly those of color must be provided assistance, be it with test taking, mentoring, etc. I, along with my fellow committee members will work to provide our knowledge of our communities to assist in the recruitment of eligible candidates,” said George Siberón, Executive Director of the Hempstead Hispanic Civic Association.
“Nassau Community College strives to support the current and future needs of the County and the communities that comprise the County. As President, I am proud of our broadly diversified institution. The College is committed to the maintenance and preservation of a community environment in which respect for the dignity and worth of each individual is demonstrated, and where diversity, equity, and inclusion, as well as the free exchange of ideas can flourish. We commend the County for forming this committee,” said Dr. Jermaine F. Williams, President, Nassau Community College.
“It's great to see the County Executive taking this initiative to ensure our police department fully harnesses the rich diversity of Nassau County”, said Toufique Harun of Muslims for Progress.
“A diverse mix of voices leads to better discussions, decisions, and outcomes for everyone,” said Jay Singh, Asian American Affairs Councilmember and member of Indian Association of Long Island.
The full press conference can be viewed here.