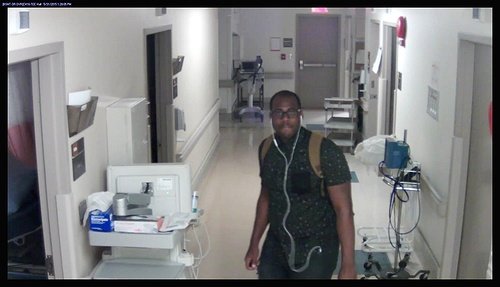 Update - June 4, 2015 - Third Squad detectives report the arrest of Sean Thomas, 24, (no known address) on Wednesday, 06/03/15, in connection with the below listed crime.  Thomas is being charged with Burglary 3rd Degree, two counts of Criminal Possession Stolen Property 4th Degree and will be arraigned on Thursday, 06/04/15 in First District Court, Hempstead.

According to detectives, a male black subject entered St. Francis Hospital located at 100 Port Washington Boulevard and continued to the Cardiac Imaging Area in the basement which is closed on Sundays.  The subject removed a master key and Identification Card from the nurse’s station then entered the staff lounge where he changed into hospital scrubs.  The suspect then proceeded to open multiple offices and removed an Amazon Kindle and undisclosed US currency.  On June 2, 2015 the victims noticed the items missing and notified security.  Security reviewed surveillance video and notified police.