Local resident featured in national anti-smoking campaign lends her voice to raise awareness of the dangers of tobacco use. 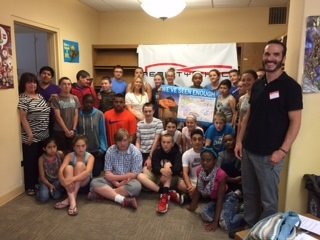 Medford, NY - June 2, 2015 - World No Tobacco Day, sponsored by the World Health Organization (WHO), is held annually on May 31st and brings together people around the world to stand up against big tobacco.  The global tobacco epidemic is killing 6 million people every year but local teens and leaders continue to work to reduce smoking rates and protect kids from tobacco marketing.

To celebrate World No Tobacco Day, Marlene, a local resident who is featured in the CDC’s national Tips From Former Smokers campaign, joined Reality Check in speaking with students at Oregon Middle School in Medford about the dangers of tobacco use.  Students then participated in a “We’ve Seen Enough Tobacco Marketing” activity to raise awareness of the impact tobacco marketing has on youth smoking.

“I shared my story with the Tips campaign in hopes that it would inspire smokers to quit and avoid health problems many like myself experience because of smoking,” said Marlene. “I am so glad to see young people today in Long Island, sharing the truth about the consequences of smoking to prevent their peers from ever starting.”

“New York State has experienced many successes in tobacco control due to community leaders and champions who have shared their personal experience and passion about ending the tobacco epidemic”, said Michael Hoffner, Reality Check LI Coordinator, “Marlene’s courage to share her story is inspiring and supports Reality Check’s teen movement to stand up to the tobacco industry and not become the next generation of smokers.”

Tobacco use is still the leading cause of preventable disease and death in New York State, killing 28,200 New Yorkers every year and afflicting nearly 600,000 New Yorkers with serious disease directly attributable to their smoking.  Annual health care costs directly caused by smoking are $10.39 billion in New York State, including $6.62 billion paid by the state Medicaid program.

“Every day, the tobacco industry spends over half a million dollars in New York State to market its products.  Research shows that the more kids see tobacco marketing, the more likely they are to start smoking.” said Susan Kennedy, Director of theTobacco Action Coalition of Long Island, “It’s time to protect our kids.”

"Most of us have been adversely affected by tobacco in one way or another,” said Michael Seilback, Vice President of Public Policy & Communications at the American Lung Association of the Northeast. "Whether we've seen a friend or a family member suffer as a result of a tobacco-caused disease or we've had a loved one taken from us too soon, the personal cost of tobacco use is very real and extremely painful to bear. The American Lung Association applauds Marlene, Reality Check and all those who are speaking out on World No Tobacco Day to set the record straight about this dangerous substance that remains a major public health threat."

Reality Check is a New York State youth-led, adult supported group against the deceptive marketing practices of the tobacco industry and the way they market their products towards youth. Reality Check youth work to expose the truth about the way the tobacco industry advertises and tries to eliminate those marketing opportunities in their community.

Reality Check LI is part of the Tobacco Action Coalition of Long Island which is funded by the NY Tobacco Control Program through a grant administered by the American Lung Association of the Northeast.  To learn more visit RealityCheckLI.org.