The DEC proposed regulations to remove all free-ranging mute swans from New York, starting with the large mute swan population on Long Island and in the lower Hudson Valley. 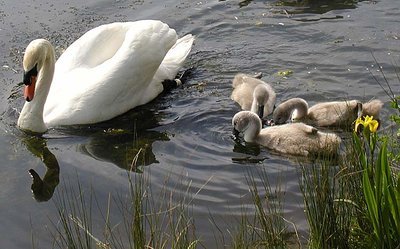 The New York State Department of Environmental Conservation released a management plan for New York’s mute swan population on Friday that largely focuses on the swans of Long Island.

Mute swans are the large white swans often seen at ponds and parks that have orange and black bills, and are typically much quieter than other species of waterfowl. They are a non-native, invasive species that were brought to North America from Eurasia for ornamental purposes in the late 1800s.

These swans exacerbate numerous environmental problems, including the destruction of submerged aquatic vegetation, displacement of native wildlife species, and degradation of water quality.  People also find it difficult to coexist with mute swans, as they exhibit aggressive behavior towards humans.

“Some swans will directly attack humans, especially small children, who get too close to nests or young,” said the DEC in the management plan. “The potential for injury is low, but the aggressive behavior of swans can be a serious nuisance and render some land or water areas inaccessible for outdoor recreation during the nesting season.”

Of the nearly 2,200 mute swans in New York, the majority of the birds reside in Long Island and the lower Hudson Valley, but they have been rapidly spreading upstate in recent decades.

The proposed plan calls for the mute swan to be listed as a “prohibited species” in the state, and for the elimination of New York’s entire free-range mute swan population by 2025 by using methods that are deemed “safe, humane, responsible, and effective.”  Such authorized control measures that would be applied if the plan is passed include oiling, puncturing, freezing, shaking, replacing, or removing the eggs to prevent further generations of swans from hatching.  The DEC has also authorized the destruction of nests, sterilization of birds, shooting, capture and removal of birds to be euthanized, or turning the birds over to individuals licensed to keep the birds in captivity.  They are also considering allowing waterfowl hunters to take mute swans during certain seasons.

Under the proposed regulations, it would also be illegal to transfer mute swans into the state, or to breed the birds without a proper permit.

If birds are euthanized, the DEC said in its plan that it would make an additional plan to donate the meat to local food pantries.

Mute swans are currently protected by the New York State Environmental Conservation Law, which states that swans, swan nests, and swan eggs cannot be handled or harmed without authorization from DEC.