The 34-foot female whale reportedly beached in Amagansett over the weekend. 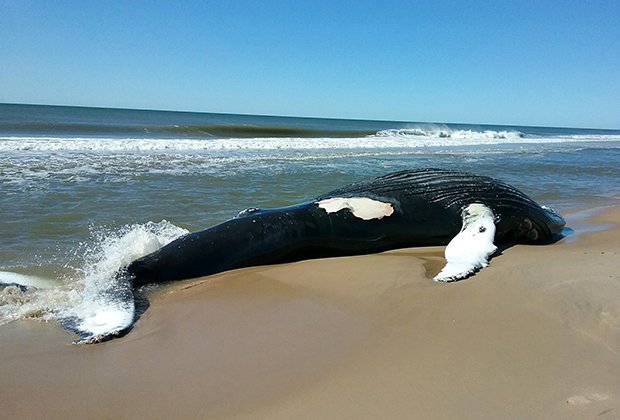 The Atlantic Marine Conservation Society said in a statement on Facebook that it was responding to a call that a 34-foot female humpback whale had washed up in Amagansett on Saturday night.

“We are working with NYS Department of Environmental Conservation, NOAA Fisheries New England/Mid-Atlantic, and Town of East Hampton,” the organization said. “This is our third large whale response of the year, all of which took place in May.”

After a necropsy examination was conducted it was on the whale on Sunday, they said that there were signs of suspect bruising.

“Samples were taken and will be sent to a pathologist to determine if there is any evidence of trauma,” they said. “We will share fluke photos with local and regional partners to see if there is anymore [sic] history on this animal.”

The Atlantic Marine Conservation Society says that it collaborates with other research partners including Wildlife Conservation Society, Gotham Whale, Coastal Research and Education Society of Long Island, Inc., and the Center for Coastal Studies, to gather any other sightings history on humpback whales as they travel through New York to their northern and southern feeding grounds.

“These collaborations help [Atlantic Marine Conservation Society] contribute to the bigger picture of the health of whales and our waters, and the challenges they are facing,” they said.