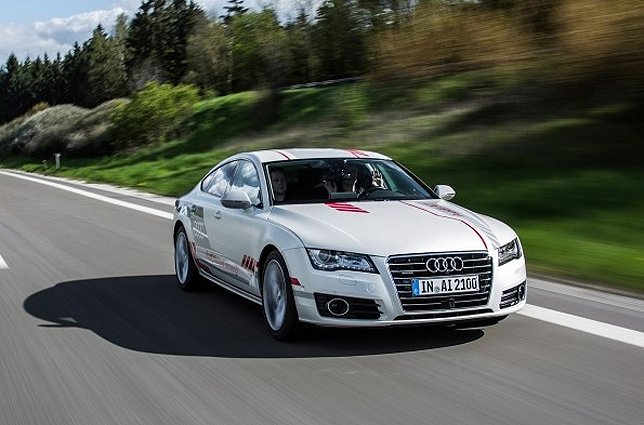 Audi of America Inc. was the first company to apply for the rights to demonstrate autonomous vehicle technology in New York and the first to be approved under the program.

Albany, NY - May 31, 2017 - Governor Andrew M. Cuomo today announced that Audi of America Inc. is the first company approved to perform an autonomous vehicle demonstration in New York State. Earlier this month, the Governor announced that New York is now accepting applications from companies interested in testing or demonstrating autonomous vehicles on public roads. The company plans to conduct the first such demonstration in state history, beginning in the City of Albany near the State Capitol in on June 13.
"Autonomous vehicles are a major part of the future of the automotive industry and this pilot program will help ensure New York continues to be a hub of innovation and cutting edge technology,” Governor Cuomo said. "This emerging technology has the potential to decrease accidents and save lives on our roadways, and with this approval we are one step closer to a safer and stronger New York for all."
Included in the FY 2018 Budget, new legislation allows for testing autonomous technology through a year-long pilot program. Audi of America Inc. was the first company to apply for the rights to demonstrate this technology in New York and the first to be approved under the program. The technology they plan to demonstrate in the Capital Region is considered to be a Level 3 in autonomous vehicle operations by the Society of Automobile Engineers, meaning it is capable of safely allowing hands-free driving at posted highway speeds, but requiring a person to take over if required. Two trained engineers will be in the vehicle to monitor the system and ensure safety, one in the front seat and one in the back seat. The vehicle has already logged thousands of miles on highways across the U.S. safely.
The company’s vehicle routing information has been pre-approved by the New York State Police and its application was approved by the Department of Motor Vehicles on Friday, May 26.
DMV Executive Deputy Commissioner Terri Egan said, "Governor Cuomo’s commitment to enhancing highway safety through technology has made New York State one of the safest places to drive in the nation. These first tests and demonstrations that will take place in New York truly are the building blocks of safer, more flexible and accessible means of transportation. Autonomous vehicle technology will soon take highway safety to a whole new level and thanks to the Governor’s leadership, I am confident that New York State will be ready."
New York State Police Superintendent George P. Beach II said, "The State Police is committed to oversight of the autonomous vehicle testing process and are eager to be a part of it. We will work with the individual companies and the Department of Motor Vehicles to ensure that the technologies are evaluated safely and appropriately."
Brad Stertz, Director, Audi Government Affairs in Washington, D.C. said, "Automated vehicles have enormous potential to improve safety on New York roads, ease congestion and open up new mobility choices across the state’s diverse landscape. We applaud Governor Cuomo for his leadership and stand ready to assist in defining how this future will unfold in the Empire State now and for years to come."
Applications for testing may be submitted by manufacturers of "autonomous vehicle technology," or companies creating such technology working in conjunction with manufacturers. All vehicles will also have to comply with federal safety standards and all applicable New York State inspection standards, and a​ person holding a valid driver license must be present in the driver's seat at all times while it is operated on public highways. Each vehicle to be used must be listed in the application, and a $5 million insurance policy must be in place for any vehicles to be tested.
Among other things, companies must also submit a report on demonstrations or tests, undertaken pursuant to a DMV permit, to the Commissioner of Motor Vehicles no later than March 1, 2018. The law permitting demonstrations or tests is set to expire April 1, 2018. DMV and State Police are required by law to submit a report on New York’s progress with autonomous vehicle testing no later than June 1, 2018. Testing requirements and the application are available here.