Crescent Duck Farm was founded in 1908; the operation has been the livelihood for five generations 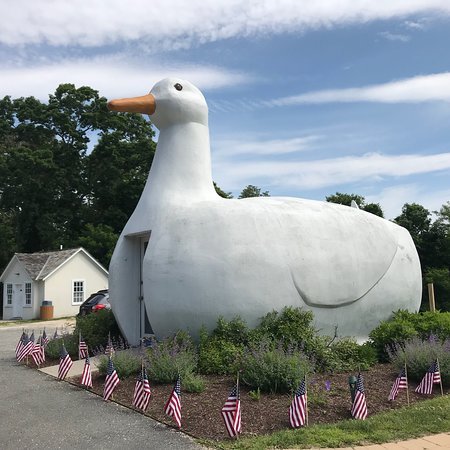 Duck farming once flourished on Long Island, but only a single farm remains. Still, there is one place where you can learn about the Long Island ducks and their history.

If anyone understands the Long Island duck, it's Doug Corwin. For 5 generations now, his family has run the Crescent Duck Farm in Aquebogue.

"It's a 7 day a week, 365 day a year type job, and either you love it or you don't," Corwin said. But Doug? He's now the only duck farmer left on Long Island due to increasing costs of land, increasing regulations and changing times.

Most of the duck farms have relocated to places like Pennsylvania, Indiana and California where it's cheaper to do business. "I had 3 classmates in high school that were duck farmers, and now, it's just memories for them," Corwin said.

Along Route 24 in Flanders is a pretty big reminder of what once was. Janice Young is a docent at "The Big Duck," a 20 foot tall and 30 foot long mini-museum in the shape of a duck as a testament to Long Island's signature industry in its heyday. It was actually built 88 years ago born of an idea by duck farmer Martin Maurer.

"And (there) was a sign to advertise the Duck Farm, and then right inside, they sold the poultry," Young said. They used to sell duck eggs too, but these days it's a kitschy, little gift shop and place to learn about all things duck.

"My former colleague used to say, 'duck in and take a gander,'" she laughed. "I grew up in Kings Park, and I would come out, and it was just always something that I remember fondly," Big Duck author Susan Van Scoy said. The museum draws visitors of all ages from all over the world. "So here we are, looking for it on the phone, I go, 'I'm telling you there's a Duck here somewhere', and my husband's like, 'there it is!'" Debbie Marcel-Wack of Florida said.

Corwin's even gotten into the fun. His daughter took wedding pictures here. The building, owned by Suffolk County, was actually moved around the area, then back to this location over the years.