The controversy surrounding the U.S. Governments seizure of phone records at the Associated Press. 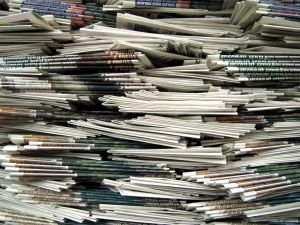 "Dear general holder: I am writing to object the strongest possible terms to a massive and unprecedented intrusion by the department of justice into the news gathering activities of the Associated Press... "   Gary Pruitt, President of A.P.

The most recent developments regarding the activities of the US. Government have been less than justifiable. Developments surrounding the intrusion of privacy against the Associated Press and their journalists and editors, have been astounding.

May 10th 2013, the department of justice admitted to recording, monitoring and seizing phone records among over 20 different phone lines at AP which were used by reporters and editors. When they admitted to the seizure of phone records, the Department of Justice also confirmed that this had been going on over the course of two months.

Reasoning as to why the Department of Justice was so curious about the operations of one of the oldest and most prominent news sources proved to be obvious.

During the week of May 2nd 2012, which marks the anniversary of the death of Osama Bin Laden, the CIA had halted a terrorist plot in Yemen to detonate an explosive device on a jetliner heading towards the United States.  The Associated press reported this story only days later on May 7th, 2012.

The Department of Justice believed that the Associated Press "put the American people at risk," and disclosed confidential information without consent. The government also asked A.P to hold the story, which they did, although they eventually published it to the public. The US officials also claim that the story would endanger the life of an informant from Britain who had discreet knowledge of the operations of Al Qaeda and their plans to potentially harm Americans.

The United States Attorney General Eric Holder, on behalf of The Department of Justice, states that they had reason to believe that the Associated Press was gaining confidential information from an inside source.
Spying on the Associated Press in such a coordinated undercover plot by the government threatens the freedom of the press altogether and the good-standing of the government in the eyes of Americans. Without freedom of press, especially an unbiased outlet who relies on reputable sources such as A.P, the truth behind controversy and current events is prevented from reaching the public.

Eric Holder also states that he was not involved and chose to remove himself from the criminal investigation of the Associated Press, leaving Deputy Attorney General James M. Cole, to authorize the subpoena.
"I recused myself because I thought it would be inappropriate and have a bad appearance to be a person who was a fact witness in the case to actually lead the investigation given the fact, unlike Mr. Cole, that I have a greater interaction with members of the press than he does," Holder objected.

Holder seemed to use his discretion in playing a part in this controversial violation of privacy by the Department of Justice. Perhaps to protect both himself and his rapport with press. Avoiding the conflict in his own best interest,  raises its own concerns amidst this downward spiraling controversy.
"I am a possessor of the information that was ultimately leaked. And the question then is who of those people who possessed that information, which was a relatively limited number of people within the Justice Department, who of those people, who of those possessors actually spoke in an inappropriate way to members of the Associated Press." Holder speculates.
Still, the Obama Administration is claiming they were not involved and had no common knowledge of the criminal investigation against The Associated Press.
The targeting of investigative journalists and the violation of their privacy by the Department of Justice is widely viewed as a grotesque infringement on the freedom of the press. The question still remains, who was responsible for leaking the confidential information to a journalist at the Associated Press?
This incident proves that investigative news is at risk from being intercepted by the US government before reaching the American public. It also instills paranoia on the journalists, editors, and their anonymous sources whom provide the public with our news. Outrage against the governments secretive motives dealing with the press can possibly change the protocol of investigative journalism, forcing journalists to obtain their information via new methods and the arranging of extremely intimate encounters with informants to gather confidential information.
There will be more updates to this story as it develops.
[Sources: CNN, Washington Times]