The Long Island-based squadron of six World War II-era aircraft will perform over the skies at Jones Beach State Park. 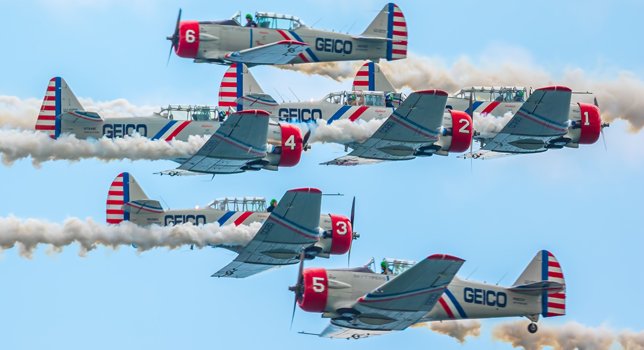 The GEICO Skytypers Air Show Team is based in Farmingdale, NY and has performed at air shows for more than 30 years.

Wantagh, NY - May 16, 2017 - The world famous GEICO Skytypers air show team will take flight at the 2017 Bethpage Air Show at Jones Beach on May 27-28. The Long Island-based squadron of six World War II-era aircraft will perform their low-level, precision-flying demonstration over the skies at Jones Beach State Park.
"The SNJs flown by our team were originally used as training aircraft for WWII and Korean war pilots," says Team Flight Lead and Long Island resident Larry Arken.  "We consider it an honor to demonstrate the amazing abilities of these vintage warbirds on behalf of our sponsor, GEICO, while sharing a bit of aviation history.  At more than 75 years old, the SNJ-2 is a testament to the engineering genius of the Greatest Generation. These planes are a dream to fly."
The GEICO Skytypers fly six SNJs powered by 600-horsepower Pratt and Whitney engines.  As a training aircraft, the SNJ can perform all the maneuvers of a fighter plane at slower speeds. The historic sound of the vintage engines fills the air as the team exhibits more than 20 different tactical maneuvers during its 18-minute, low-level flying demonstration.
The "Skytypers" portion of the team name stems from the proprietary manner of creating giant messages in the sky.  Flying five aircraft in a tight, line-abreast formation, the planes coordinate in typing dot matrix-style messages with environmentally friendly puffs of white smoke. A computer located in the lead aircraft utilizes a custom programmed tablet to send commands to the other planes via radio signals.  The result is astonishing to behold. Messages can be seen from 15 miles away in any direction with 20-25 characters generated in less than two minutes. Individual letters can be as tall as the Empire State Building.
"Our pilots deliver crowd-pleasing performances at every event we attend," said pilot and Marketing Officer Steve Kapur. “While we always enjoy flying our demonstration, the best part is meeting air show fans from the youngest of future aviators to veterans who trained in our aircraft.”
The USAF Thunderbirds will headline the Rhode Island National Guard Open House Air Show for two days of family fun May 27-28 and will feature demonstrations by the US Army Golden Knights Skydiving Team, Sean D. Tucker, David Windmiller, Matt Chapman, and more!
For more information on the Bethpage Air Show at Jones Beach and full list of performers, visit http://bethpageairshow.com.
About the GEICO Skytypers
The GEICO Skytypers Air Show Team is based in Farmingdale, NY and has performed at air shows for more than 30 years.  During the team’s tenure, it has received numerous awards, most recently the Art Scholl Showmanship Award for excellence in air show performance.  For more information on the GEICO Skytypers, visit geicoskytypers.com.