New $50 million, 230,000 square foot headquarters will give Dealertrack the breathing space to continue to organically grow and evolve in an ever-changing marketplace.

Long Island, NY - May 11, 2017 - With the Long Island economy limping its way to recovery, it’s refreshing to see a home-grown company that’s not only managing to survive, but thrive and grow; that’s something that Dealertrack, a Cox Automotive Company, knows how to do all too well, when the company announced in 2014 a move into a new, custom-built, high-tech headquarters in New Hyde Park this June.
Dealertrack, which specializes in providing software solutions, digital marketing, and retail tools for automotive dealerships, lenders, and OEMs, was founded back in 2001 in Mineola, and between then and now it's grown massively; by 2015, it was a legitimate billion-dollar business with over 4,000 team members globally. 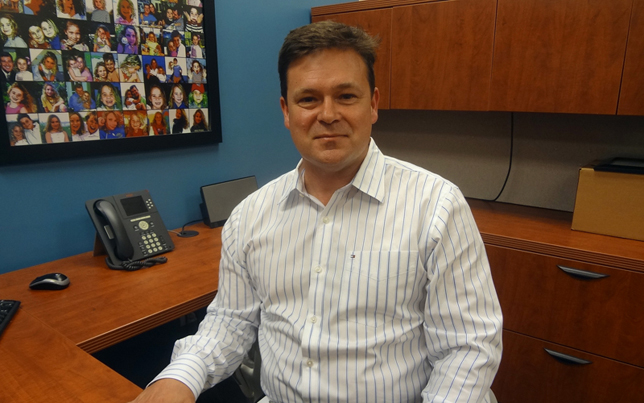 Dealertrack Senior Vice President and Chief Financial Officer Dean Tilsley. Photo Credit: Chris Boyle
Currently headquartered in Lake Success, their new base of operations this June will be right down the road – Dealertrack has a reputation for pushing the envelope when it comes to the application of cutting edge technology; in fact, it's something they've done since the very day they were founded, according to Chief Financial Officer Dean Tilsley.
“Basically, it's about innovation and really trying to change the way that people buy, sell, and own cars…we tried to differentiate ourselves from our competition by having more customer focus, technology focus, and innovative products... back in 2001, Dealertrack was born out of replacing the fax machine with an electronic portal connecting lenders with dealers. Today, we connect roughly 21,000 dealers with a network of 1,600 lenders, as replacing the fax was a great innovation back in 2001.”
In October 2015, Dealertrack was acquired by Cox Enterprises, a well-known conglomerate whose divisions include broadband communications, automotive services, and media, including radio stations and TV channels. Within Cox Automotive - in which the house of brands includes Kelley Blue Book, Autotrader, and Manheim Auctions - Cox Automotive now touches three out of every four cars sold in the country every year, Tilsley said.
“In 2015, Cox was going into automotive in a very significant way, and they also had a software business – as did we – so Cox and Dealertrack coming together actually made a huge amount of strategic sense,” he said. “We both had gaps, and coming together really did make us become complete as a whole. And then you add the overall size and reach– with Cox Automotive having 33,000 team members and 200 offices globally – we spend more on R&D for our sector than pretty much anybody else.” 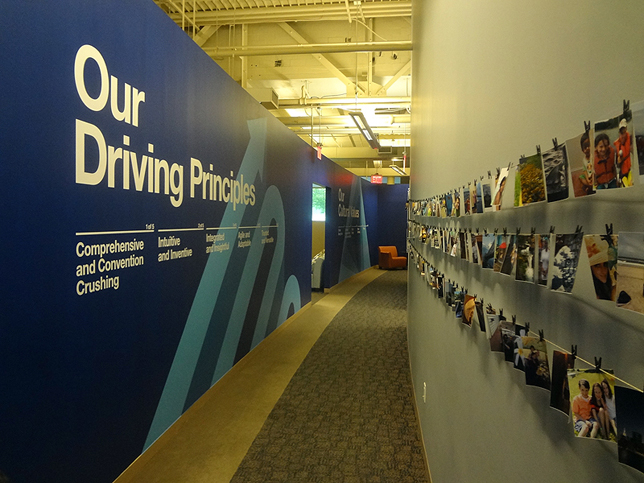 Dealertrack’s current headquarters, located in New Hyde Park, is filled with multi-colored walls adorned with motivational slogans, projecting an unexpected feeling of warmth and encouragement. Photo Credit: Chris Boyle
In the business field, it's often typical for a company to pull up their tent pegs and move to areas seen as more conducive to their goals during periods of rapid growth; however, Tilsley noted that, despite some companies recently reducing or outright eliminating their presence on Long Island, Dealertrack instead intends to invest more heavily in the community they have called home since inception.
Dealertrack’s current headquarters, located at 1111 Marcus Avenue, Lake Success, NY, is breathtaking enough when you first walk in past the lobby doors; expansive, warehouse-sized rooms filled with cubicles and multi-colored walls adorned with motivational slogans, their home base projects an unexpected feeling of warmth and encouragement. However, as hard as it is to believe, Dealertrack has outgrown this huge facility; accommodating just over 500 employees, Tilsley noted that their new $50 million, 230,000 square foot headquarters located at 3400 New Hyde Park Road – that's currently being built from scratch – will accommodate 800+, giving them the breathing space to continue to organically grow and evolve in an ever-changing marketplace.
“The decision to start building our new headquarters was made well before the acquisition by Cox in 2015...since 2001, the company has grown tremendously, and we depend upon talent.That's the key to our success, and it was about building a space that really matched our culture, an environment where team members really feel like they're set up for success,” he said. “In the new building, we have two floors with purpose-built space for software engineers, and all the amenities that go with that to help them grow and thrive. We’re not only creating a more ideal space for our team members, but reflecting a significant investment in Long Island as well.” 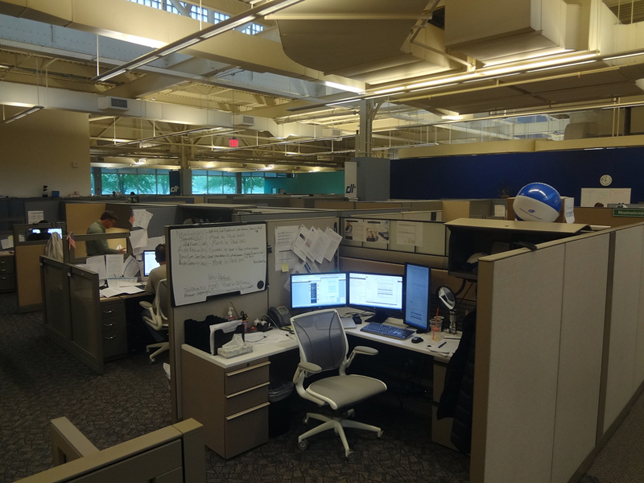 Dealertrack’s current headquarters features expansive, warehouse-sized rooms filled with cubicles; however, as hard as it is to believe, Dealertrack has outgrown this huge facility. Photo Credit: Chris Boyle
Tilsley noted that Dealertrack remains firmly committed to Long Island, going so far as to sign a 17-year lease for their new headquarters.
“There's never been any consideration to leaving Long Island... we want to remain here as a commitment to our team members. One of the great things about the culture of the company is our loyalty to our team members,” he said. “That's why, when we needed to relocate to a new headquarters, we only looked on Long Island and, not finding a building that suited our needs, decided to build our own with a Silicon Valley-style feel.”
A strong part of the ‘company culture’ that Tilsley consistently refers to involves giving Dealertrack employees not only a proper work-life balance, but crafting a work environment that actually makes them look forward to the idea of getting up and going to work each day. Their new headquarters is slated to have amenities that most white-collar workers could only dream of, including indoor basketball, volleyball, and cricket courts, a full kitchen, indoor and outdoor eateries, a video game room, gym facilities, and more.
“We have a very diverse, cosmopolitan set of team members, so we want to reflect that,” Tilsley said. “We're competing for talent, just like everyone else. We want to get the best talent, and the reality is that today people want those kinds of facilities. People put a lot of value on their work environment, and we already feel the excitement and the buzz from our employees about the new headquarters that we're moving to.”
But in addition to wanting to grow as a company, Tilsley noted that Dealertrack also strongly desires to grow as Long Islanders as well, giving back to the community that they’ve called home for the past 16 years.
“We understand our role in Nassau County, and on Long Island, and we want to play a bigger role,” he said. “Cox Automotive has a long track record of working with charities, as does Dealertrack, and as a company we actually allow employees to take a number of days of paid leave to do volunteer work. We actually have a full-time team member on staff that not only focuses on team wellness, but who makes sure that we're focusing on community wellness also."
Another advantage of remaining on Long Island instead of going into the city, Tilsley said, is the near-limitless amount of space available to them; in contrast, companies in Manhattan – where space comes at a premium – are often fighting for every inch, and are often forced to settle for less; when you’re trying to attract the best employees, Tilsley recognizes that you need to offer the best in return, and Long Island enables Dealertrack to do just that.
“Our new headquarters being a new building offers us an advantage in that we’re not going into an existing structure and having to retro-fit it,” he said. “We’re creating a building with purpose-built facilities that will allow Dealertrack to not only grow in the present, but in the future as well.”