Daniel Hassler, 39, faces a maximum sentence of up to 15 years in prison if convicted. 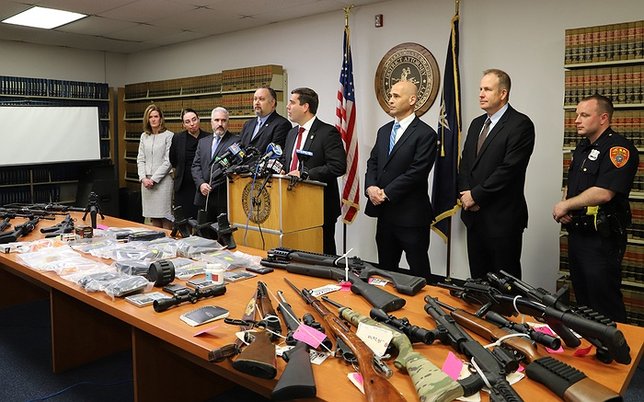 DA Sini, HSI, and SCPD announce the indictment of a Shirley Man on Oxycodone trafficking and Weapons charges.

Suffolk County District Attorney Timothy D. Sini, Homeland Security Investigations (“HSI”) New York and the Suffolk County Police Department today announced the unsealing of a 19-count indictment against a Shirley man for running an alleged illicit oxycodone pill trafficking operation and for the illegal possession of assault weapons.
“This individual armed himself to the teeth and he did so, at least in part, to protect his drug business,” District Attorney Sini said. “That drug business was particularly offensive. He would prey upon individuals with prescriptions for oxycodone and approach those individuals to purchase oxycodone from them so that he could illegally distribute those pills to people suffering from addiction.”
Daniel Hassler, 39, of Shirley, is charged with Criminal Possession of a Weapon in the Second Degree, a C felony; 12 counts of Criminal Possession of a Weapon in the Third Degree, a D felony; Criminal Possession of a Controlled Substance in the Third Degree, a B felony; Criminal Possession of a Controlled Substance in the Fourth Degree, a C felony; Criminally Using Drug Paraphernalia in the Second Degree, an A misdemeanor; Criminal Possession of a Controlled Substance in the Seventh Degree, an A misdemeanor; and two counts of Criminal Possession of a Weapon in the Fourth Degree, an A misdemeanor.
In March 2019, the Suffolk County Police Department’s Seventh Precinct Special Operations Team began an investigation into an alleged drug operation at Hassler’s residence, located at 69 Baybright Drive West in Shirley, in response to community complaints.
The investigation, which was conducted in collaboration with the District Attorney’s Office and HSI, revealed evidence that Hassler has allegedly been operating an illicit pill trafficking operation for several years in which he purchases oxycodone pills from individuals who have prescriptions for them and resells the pills for a profit. Hassler allegedly kept a list of people who had prescriptions for oxycodone and the dates on which their prescriptions would be renewed.
On April 24, a search warrant was executed at Hassler’s residence that resulted in the seizure of 11 grams of oxycodone pills, five scales, a drug ledger, $1,032 in cash and packaging materials consistent with drug sales. Law enforcement also recovered 17 long guns, including four assault weapons, 29 high-capacity magazines and more than 30 boxes of ammunition. Among the ammunition seized was a 50-round drum and several “starfish” pentagon AR-15 magazine couplers.
“It’s bad enough that a drug dealer had access to these guns and this ammunition, but we also know that crime guns pass multiple hands; a person who uses a gun illegally most likely got that gun from another criminal,” District Attorney Sini said. “The potential public safety benefit of removing these guns from the street cannot be understated.”
“Thanks to the collaborative efforts of the Suffolk County Police Department, the Suffolk County District Attorney’s Office and Homeland Security Investigations, a man who made a career out of selling oxycodone pills is being held accountable for his actions,” Suffolk County Police Commissioner Geraldine Hart said. “The department remains committed to cutting off the flow of drugs at the source and will continue pursuing dealers who are fueling the spread of narcotics which is detrimental to addicts, their families and the community.”
Hassler is scheduled to be arraigned on the indictment by Suffolk County Supreme Court Justice John Collins on May 10.
If convicted of the top count, Hassler faces a maximum sentence of up to 15 years in prison.
This case is being prosecuted by Assistant District Attorney Jacob Kubetz, of the Narcotics Bureau’s Special Narcotics Unit.
The Special Narcotics Unit, launched in 2018, focuses on the development of long-term investigations in an effort to effectively dismantle groups and organizations whose illicit activities largely impact the safety and security of Suffolk County and its residents. The Special Narcotics Unit focuses on investigating major drug traffickers operating in, and affecting, Suffolk County in collaboration with local, state and federal law enforcement agencies, including the Suffolk County Police Department.
“A cornerstone of my administration is to make sure that law enforcement agencies at all levels are working together to strategically investigate and prosecute criminals who are driving crime in the County, posing significant public safety risks and peddling poison in our communities,” District Attorney Sini said. “This particular defendant checked all of those boxes.”
A criminal charge is an accusation. A defendant is presumed innocent until and unless proven guilty.