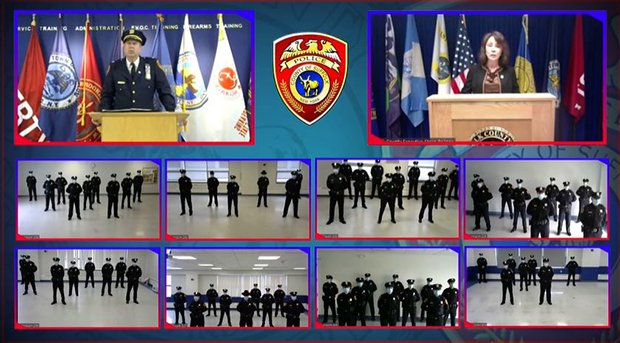 On Friday at 9am the 70 new graduates from the Suffolk County Police Department (SCPD) all stood in different rooms but together on a Facebook live video on during their graduation ceremony.

“While this graduation is missing the traditional pomp and circumstance due to the Covid-19 pandemic, the recruits used the situation to support others who are fighting the virus around-the-clock,” a statement from the SCPD said. “The recruits delivered food to emergency room staff at Stony Brook Hospital last week to show their support and thank workers for their dedication to public health.”

During the ceremony, Suffolk County Executive Steve Bellone noted that the graduation ceremony coincides with the 75th anniversary of Victory in Europe Day and the extraordinary sacrifice Americans made to keep the world safe during WWII.

“This is a job like no other,” he said. “You do not know what you face when you walk out that door.”

He said that the job came with great risk to personal safety.

“That is an extraordinary act of public service,” he said, adding that he thought the class had what it takes to face the challenges of police work and thanked and congratulated them.

SCPD Commissioner Geraldine Hart spoke during the ceremony as well. She talked about how the police would be first on scene to accidents and to incidents where they will protect the public.

“As a law enforcement officer you will at some times or multiple times throughout your career be called upon to perform deeds that few will ever understand, appreciate, or ever be able to perform themselves,” she said. “And when we do, we do it with the utmost professionalism because it is part and [parcel to who we are at our core.”

You can watch the video of the ceremony by clicking here.