Team qualified for playoffs for the sixth consecutive year with a third-place finish in their division. 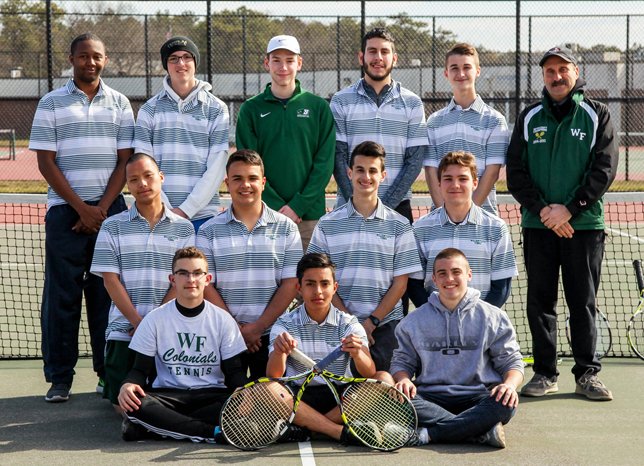 Mastic Beach, NY - May 5, 2017 - The William Floyd Colonials boys varsity tennis team under the tutelage of Dave Pia, a two-time United States Tennis Association Coach of the Year, qualified for the playoffs for the sixth consecutive year with a third-place finish in their division out of 13 teams.
Their regular season performance earned them a No. 13 seed and a home playoff match against No. 20 ranked Sayville on May 3, which the Colonials won 6-1 behind victories in second-, third- and fourth-Singles and all three Doubles matches. Winners against Sayville included Kevin Jiang, Jeramie Stoessel and Patrick Barnett in Singles; and Bryan Ruales, Dawson Kropp, A.G. Chancellor IV, Will Fonseca, Brandon Bratchie and Waldo Rustrian in Doubles. The Colonials travel to Commack on Tuesday, May 9, to face off against No. 4 Commack in a second-round playoff match.
Team members include seniors Christopher Robertson (team captain), Kevin Jiang, Jeramie Stoessel, Bryan Ruales, Dawson Kropp, A.G. Chancellor IV, William Fonseca and Cole White; junior Thomas Panicola; sophomores Brandon Bratchie and Waldo Rustrian; and freshman Patrick Barnett.
Additionally, the Colonials have two top-seeded players out of 32 competitors in the upcoming Conference Individual Singles Tournament – No. 4 Christopher Robertson and No. 6 Kevin Jiang. Bryan Ruales and Dawson Kropp have received the No. 4 ranking in the upcoming Individual Doubles Tournament. All players are hoping to advance to the County Individual Tournament at William Floyd on May 17.