The Colonials’ success this season has been a long time coming, as the team consists of many seniors who have been playing and developing together for years. 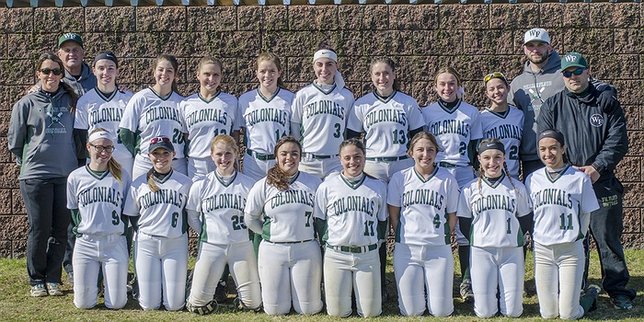 Mastic Beach, NY - April 30, 2018 - The William Floyd varsity softball team got off to a quick start this season, winning their first five games in a row. The next stretch of games was more of a challenge for the Colonials as they lost their next four in a row. However, the well-experienced Colonials would bounce back, winning three of their next four games bringing their total record to 8-5 (3-2 in League I). They currently sit in second place in League I.
The Colonials’ success this season has been a long time coming, as the team consists of many seniors who have been playing and developing together for years. “A handful of the students have been with me since ninth grade and each year we have been progressively getting better and better,” said head coach Fred Luhrs. Other schools seem to have taken notice of the improved play and overall development of this year’s team. “We are at a point now, in the eyes of the other teams on Long Island, where we are a respected club.”
This season has been highly anticipated by Coach Luhrs, his coaching staff, and the players. League I is highly competitive, so being able to host a home playoff game is one goal Coach Luhrs has his sights set on. “It would be huge for this senior class.” Coach Luhrs is confident in his team’s ability to battle each and every day this season. “League I is a battle every day. Each team is as good as the next and we understand that it won’t be easy this season but I am confident in my players and coaching staff.”
Even more so than their on-field performance, Coach Luhrs expects his student athletes to represent the district with honor and integrity. “I wouldn’t have it any other way. You aren’t going to wear the William Floyd logo if you don’t conduct yourself in a quality manner, and these kids represent the district tremendously each and every day.”
The ultimate prize is bringing home a League I championship, something that has not been done in over a decade. “This team is capable of doing it,” said Coach Luhrs.
With six games remaining this season, Floyd is right in the middle of the playoff conversation. Led by seniors Jayna Rios (leads Suffolk County with eight home runs), Brianna LoMonaco, Julia Mastrup, Talia Dongvort, and Jenna Klaus (six wins), the Colonials will look to continue their great play and host that all important home playoff game.
Additional team members include: Janel Cizan, Abby Toranzo, Rachel Cizan, Courtney Greene, Kiera Horan, Jessica LaGuerra, Tristan Santiago, Juliet Gagliardo, Alyssa Currao, Johanna Metz and Suzanne Roberts.