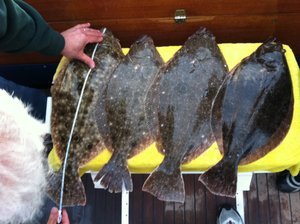 Under the new regional management approach, it is projected that recreational anglers will be allowed to harvest 50 percent more fluke in 2014 than would have been allowed under the traditional state system.

"For more than a decade New York anglers were at a significant disadvantage in harvesting fluke, but thanks to the tireless efforts of Governor Cuomo, we now have fair rules on fluke size and catch limits, which will be a boon for recreational anglers," DEC Commissioner Joe Martens said. "This was a big victory for New York and a positive step for our recreational fishing industry. Fluke fishing is a popular sport, and we encourage anglers to take advantage of the new opportunities available this season."

In September 2013, Governor Cuomo called on the U.S. Department of Commerce to undertake an immediate reassessment of regulations on the amount of fluke New York anglers can harvest each year. The ASMFC Summer Flounder, Scup and Black Sea Bass Management Board voted for regional measures for New York, Connecticut and New Jersey that require consistent size and possession limits among the three states and a 128-day season.

The emergency regulations will implement the new ASMFC measures for the 2014 fluke season. New York anglers will now be allowed to keep five fish per day at a minimum of 18 inches during the upcoming season, which will run from May 17 to September 21.

Fred Golofaro, senior editor of The Fisherman magazine, said, "Regionalization was long overdue and adds an element of fairness for New York anglers who have had to endure the strictest fluke regulations on the coast. Based on what I'm hearing from readers and other anglers, the 18-inch size limit and generous bag should significantly increase participation in the fluke fishery."

Although New York favors a May 1 start to the fluke season, in order to achieve consistency with the other states and stay within the coastwide harvest limits, a later start date was necessary. The season still includes dates when most anglers want to fish for fluke.

Prior to the new ASMFC regional management approach, the recreational fishery operated under state-specific harvest limits that were produced using an outdated system to allocate the catch among the coastal states. Because the old system could not account for changes in the fluke population, New York has been penalized as the fluke population grew and would have been forced to take a 15 percent reduction in 2014 under the previous state-specific approach.

The emergency regulations adopted April 29, 2014 also revise rules for recreational black sea bass fishing. The season will open on July 15, five days later than in 2013, and run through December 31. The possession and minimum size limits will remain the same at 8 fish and 13 inches.

Governor Cuomo's NY Open for Fishing and Hunting Initiative is an effort to improve recreational opportunities for sportsmen and women and to boost tourism activities throughout the state. This initiative includes streamlining fishing and hunting licenses, reducing license fees, improving access for fishing and increasing hunting opportunities in New York State.