Cora Weiss, president of the Hague Appeal for Peace, will receive an honorary Doctor of Laws degree at Adelphi University's 119th commencement. 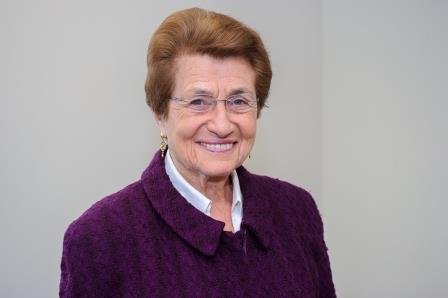 Garden City, NY - April 28th, 2015 - Adelphi University will confer an honorary Doctor of Laws degree to Cora Weiss, president of the Hague Appeal for Peace. Weiss will receive the degree at Adelphi’s 119th Commencement on Thursday, May 21, 2015 at 10:00 a.m. in the Nassau Veterans Memorial Coliseum, 1255 Hempstead Turnpike, Uniondale, NY.

Cora Weiss has devoted her life to the movements for peace, the advancement of women, civil rights and human rights both at home and abroad. She calls for the abolition of nuclear weapons and says that humanity has abolished slavery, colonialism, the prohibition of women voting, and apartheid, why not war?

Weiss is President of the Hague Appeal for Peace which launched the Global Campaign for Peace Education and has been well known as a peace activist since the early ‘60’s when she was a leader of Women Strike for Peace. She helped to organize anti-Vietnam war demonstrations including the largest on November 15, 1969 in Washington DC.

Weiss, who recently was inducted as an Honorary Member of the Delta Kappa Gamma society of key women educators, was a volunteer teacher in the NYC school system.

As a Trustee of Hampshire College she responded to students who called for divesting from corporations doing business in apartheid South Africa, and worked with co-trustees to develop a socially responsible investment policy.

Weiss has been nominated for the Nobel Peace Prize in 2000 and 2001, for her role in organizing the largest peace congress in history, and again in 2005, with 1000 women proposed by Members of the Swiss Parliament, and in 2012 with her husband, Peter, for their work for peace.

Among her many other awards are the Peace Studies Medal of Manhattan College, and the Joseph C. Wilson Award on the 50th anniversary of the UN by the Rochester United Nations Association. In 1998 she and the Rev. William Sloane Coffin were honored at The Riverside Church of New York on the 20th anniversary of their founding The Riverside Church Disarmament Program which she directed for 10 years. In 1999 The Phelps Stokes Fund honored her for her work in the 50’s and 60’s for the de colonization of Africa and for bringing nearly 800 students from East Africa to the US for education under the African American Students Foundation.

Weiss was President of the International Peace Bureau (Nobel Laureate 1910) which she now serves as UN Representative. She is an Honorary Patron of CTAUN, the Committee on Teaching About the United Nations.

Among her most prized possessions is the President’s Medal of Merit awarded at Dr. Scott’s inauguration in 2001.

About Adelphi University
Adelphi is a world-class, modern university with excellent and highly relevant programs where students prepare for lives of active citizenship and professional careers. Through its schools and programs—College of Arts and Sciences, Derner Institute of Advanced Psychological Studies, Honors College, Robert B. Willumstad School of Business, Ruth S. Ammon School of Education, University College, College of Nursing and Public Health and the School of Social Work—the coeducational university offers undergraduate and graduate degrees as well as professional and educational programs for adults. As a nationally-ranked, doctoral research university, Adelphi University currently enrolls nearly 8,000 students from 43 states and 45 foreign countries. With its main campus in Garden City and its centers in Manhattan, Suffolk County, and Poughkeepsie, the University, chartered in 1896, maintains a commitment to liberal studies, in tandem with rigorous professional preparation and active citizenship.