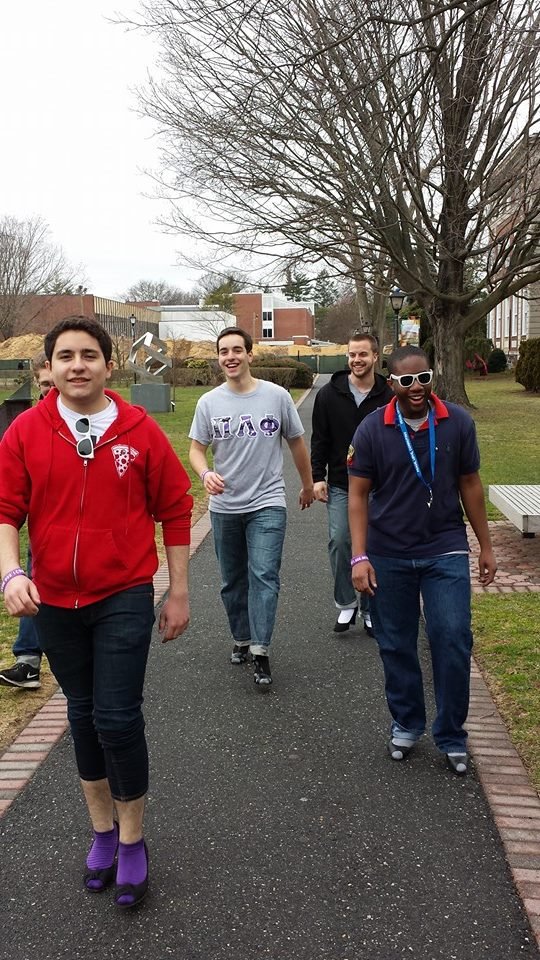 Garden City, NY - April 28th, 2014 - On Wednesday, April 2, 2014, brothers of Pi Lambda Phi fraternity carried on, despite the rain, to raise awareness about domestic violence.  For the second year in a row, the brothers held “Walk a Mile in Her Shoes,” to raise money for the Suffolk County Coalition Against Domestic Violence. For each dollar donated, the brothers pledged to make a lap around the quad-in heels. This year’s event was organized by Steven Joseph, ’16, philanthropy chair of Pi Lambda Phi. He said that they raised nearly $400 for the organization even before the event kicked off on Wednesday.

Junior Leyba, ’14, Resident Assistant already had $170 donated in his name before stepping into heels, thanks to one of the students in his hall who’d heard about the event. Halfway through the day, he’d already done 15 laps, but had been making frequent stops to spread the word around campus. While many brothers found the walk in heels uncomfortable, to say the least, Junior said it wasn’t bad. He was “rocking his socks” to help protect his feet from blisters, which he’d experienced after last year’s Walk a Mile.

Michael La Sala, ’14, President of Pi Lambda Phi, said that the heels, which were generously donated by Adelphi sororities and the Office of Public Affairs, got people’s attention and helped garner interest in their cause. He thought, “It was great to see so many organizations on campus coming together for this important cause. “

To add an element of competition to the event, the brothers kept track of how much each walker was raising on a poster. That being said, the brother’s also showed support for fellow walkers, yelling “strut!” and “heel toe!” to each other.

The Suffolk County Coalition Against Domestic Violence is a non-for-profit organization that provides services to victims of domestic violence in Suffolk County, NY. Assistant Director Wendy Linsalata said, “The Walk a Mile in Her Shoes concept is a great way to get men involved in ending violence against women as those participating in and supporting the event can come together, have a great time while making a strong statement that abuse of any kind is never acceptable nor is it tolerated.”