Combination of Federal, State and County Funding Will Help to Eliminate 7,000 Cesspools. 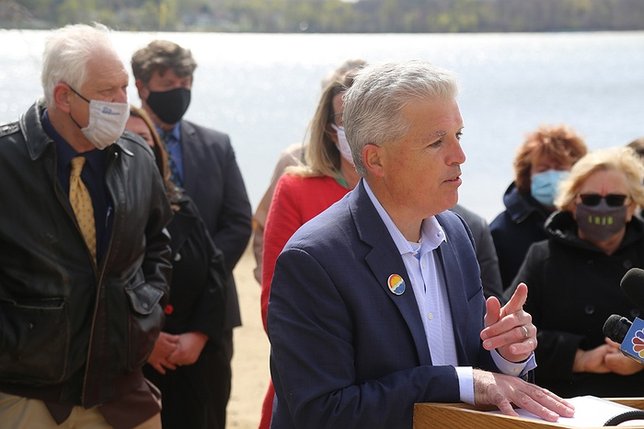 Suffolk County Executive Steve Bellone has announced $100 million in funding to eliminate outdated cesspools and septic systems identified by scientists as the primary source of excess nutrients that have fouled local bays, contributing to harmful algae blooms, beach closures and fish kills. The funding from a combination of federal, state and county sources, will be used to complete long-awaited sewer projects along south shore river corridors, and to boost funding for the landmark County program that provides grants to homeowners who choose to upgrade to new nitrogen reducing septic systems.
“With the help and support of our colleagues in state government, the business and environmental communities, and our friends in the building trades and organized labor, Suffolk County has made more progress over the past five years than had been made in the prior four decades in efforts to address the lack of wastewater infrastructure that has harmed water quality and been a drag on our economy,” said County Executive Bellone. “This new investment will allow us to take significant next steps in implementing a long term plan to improve water quality.”
Under the funding plan, a total of $30 million in funding would be invested in the County’s grant program for homeowners, including $10 million recently awarded by the State Septic System Replacement Fund, and $20 million from the County’s Drinking Water Protection Program.
An additional $70 million would be invested to complete two long awaited sewer projects along south shore river corridors that comprise the Suffolk County Coastal Resiliency Initiative (SCCRI), which will eliminate nearly 6,000 cesspools and septic systems by connecting parcels to sewers. The new funding includes $24 million from a County reserve fund to connect homes in Sewer District #3 Southwest to the existing sewer system, and $46 million from the County’s allocation under the $1.9 trillion American Recovery Plan (ARP) to address the increased cost of projects to connect parcels along the Carlls River (Babylon) and Forge River (Brookhaven).  The sewer projects are being funded primarily with Post-Sandy resiliency funding, but constructions bids received during the COVID pandemic were significantly higher than pre-bid construction estimates.
The County Executive thanked Senate Majority Leader Chuck Schumer for making sure that the American Rescue Plan funding can be used for sewer infrastructure. “We are hopeful that there will be a separate federal infrastructure bill, but the timetable for Congress to act is not clear yet, and these historic sewer projects are ready to begin now,” said the County Executive. “Thanks to the leadership of Senator Schumer, the County has the ability to use a portion of its ARP funds to address the cost increases driven in large part by the uncertainties of the COVID pandemic.”
Suffolk County’s Septic Improvement Program (SIP), the first of its kind was established in 2017 and provides grants of up to $30,000 in State and County funding to homeowners who choose to replace their existing non-performing cesspool or septic system with a new Innovative/Alternative Onsite Wastewater Treatment (IA) System. The program was recognized earlier this month by New York State as the winner of an Environmental Excellence Award, and has twice been awarded 70% of a $15 million statewide allocation of funding from the New York State Septic System Replacement Program. To date, more than 2,300 homeowners have applied for grants under the program. County funding for the program was originally established at $2 million per year, but increasing interest on the part of the public prompted the County Legislature to approve $3.7 million in additional water quality funding last July because the pace of applications exceeded the amount of funding available.
“The high level of interest in the program, even during the COVID 19 pandemic, shows just how strongly the people of Suffolk County feel about the need to improve water quality,” said County  Executive Bellone. “This additional funding will help make sure that the amount of grant funding keeps pace with the number of applications we are receiving.”
Senate Majority Leader Chuck Schumer said, “I worked hard to deliver over $10.8 billion in aid directly to New York’s counties, towns, and villages as part of the American Rescue Plan, in addition to the $300 million I secured for this project after Sandy. I’m glad to see County Executive Bellone use a portion of this aid to help fill the funding gap and advance these long-awaited sewer infrastructure improvements. These projects are vital to the health and well-being of Suffolk residents, and are essential to improving the quality of life in the county for years to come.”