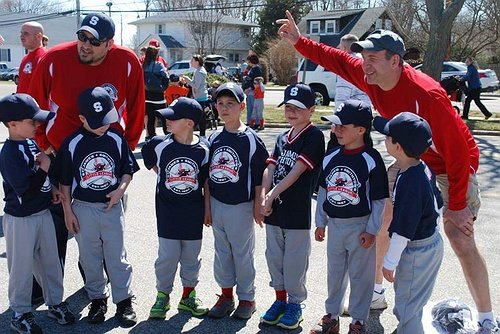 Saint James, NY - April 21st, 2015 - On Sunday, April 12th, the St. James-Smithtown Little League held it's annual Opening Day Parade. Over five hundred kids and families participated this year and they couldn't have asked for better weather.  It was a perfect day for baseball.

At 12 PM, the day started at Capital One Bank on the corner of Lake and Woodlawn Avenue in St. James. The players, coaches and families marched down Edgewood Avenue to Gaynor Field. All the players and coaches were dressed in their uniforms and each team held banners they made to represent their teams.

Chris Passaretti, League President, provided opening comments. It included his own memories of playing baseball and he thanked the hard work of the local community in helping the league be successful. He welcomed all the players and families to have fun this year and enjoy the season. The opening speaker was a former Major League Baseball player and community member. His message was about his memories playing in the league and to always work hard.

The day included festivities from raffles, hot dogs and pizza from Patio Pizza, a pitching booth for kids, games for kids, and an opening day game.

The league season officially kicked off  the following day on April 13th. If you have a change, it's a great time to get out and see a game this year.  The league will have games during the week at various parks around the community including Gaynor Field. On Friday Nights, games under the lights will be sponsored by a local business that supports our league and teams.

The league would like to thank all the local sponsor's that made the opening day a success and looks forward to the continued support of the community.