Continuing live updates of the manhunt around Boston for the still-living suspect in the Boston Marathon Bombing case. 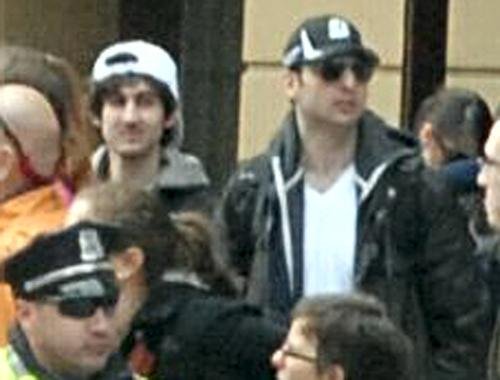 Update 11:45 AM: Law enforcement agents are still in pursuit of the younger suspect. The brothers shot Patrol Officer Sean A. Collier, unprovoked, on the campus of MIT early this morning before hijacking a Honda CR-V. That vehicle appears to have since been abandoned.

Their uncle, Ruslan Tsarni, has just released a statement delivering the condolences of his family to those who have been murdered and injured by his nephews. “I never would have imagined that somehow the children of my brother would be associated with that,” said Tsarni, “It is an atrocity.” He stated that he has not been in touch with “that part of the family” since December of 2005, passionately denying that his immediate family had any recent contact with them. “Of course we’re ashamed, yes we’re ashamed,” he added, “I respect this country, I love this country.” When asked if he knew the motives of his nephews he called them “losers,” and urged Dzhokhar to turn himself in.

Mr. Tsarni also stated that while the family is “ethnic Chechnyan” the boys were born and raised in Kyrgyzstan, and that their actions had absolutely nothing to do with their Muslim heritage.

Rapid progress has been made in the case of the Boston Marathon terrorist attack overnight, following a press conference at 5:00 PM yesterday in which the FBI released photographs of two men suspected to have been the bombers.

“After a very detailed analysis of photo, video, and other evidence, we are releasing photos of the two suspects. They are identified as Suspect 1 and Suspect 2. They appear to be associated,” said Special Agent in Charge Richard DesLauriers.

As recently as 2:00 AM this morning it appeared as though the search for these suspects was still wide open, as the FBI released additional photographs of the suspects, but that has changed dramatically. Police are currently in pursuit of Suspect 2; Suspect 1 is dead.

Law enforcement confronted the pair this morning, resulting in a shootout which killed the elder of the two suspects. It is presently unknown whether he died as a direct result of gunfire or explosives which were strapped to his body. Suspect 2 is still alive, on the run, and considered extremely dangerous.

The pair was found in Watertown, Massachusetts; Suspect 2 is liable to still be in the area. Residents of Watertown, as well as surrounding cities and towns such as Cambridge and Boston, are being advised to stay inside their homes and not to open the door unless asked by a clearly identified police officer.

The names of these individuals has been released, and it appears that they are brothers aged 26 and 19. Both men came from Chechnya originally and are thought to have been in Kazakhstan for some length of time before coming to the US. Suspect 1, the elder brother who is now dead, has been identified as Tamerlan Tsarnaev, a student of Bunker Hill Community College.

The younger, Dzhokhar Tsarnaev, is still on the run. Updates will be provided as information becomes available.