One special dog who will complete training in June is seeking a veteran to be united with. 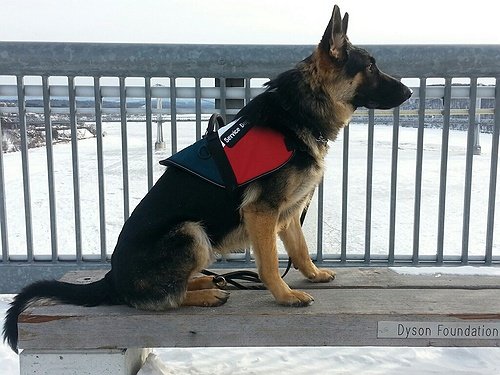 Smithtown, NY - April 17th, 2015 - One special dog who will complete training in June is seeking a veteran to be united with. Guardians of Rescue, an animal rescue organization, announces a new chapter of the organization, which will be in Hudson Valley, New York. The new chapter, Paws of War, will be headed up by combat veteran and animal trainer Charles Jackson. The organization is already collaborating in an effort to match a rescued dog with a veteran in the upper New York region.

"Our mission with this is to help bring together veterans and the trained dogs who ultimately need each other,” stated Dori Scofield, vice president of Guardians of Rescue. “We are pleased to be partnering with Paws of War on this front and know that it will make a difference in the lives of many.”

Paws of War’s Hudson Valley chapter is currently training a 1 year old rescued German shepherd named Geronimo, who will be placed with a local veteran once training is completed. The mission of Paws of War, a not-for-profit organization, is to provide service dogs to military veterans who suffer from Post-Traumatic Stress Disorder (PTSD), as well as brain injuries.

PTSD, according to the U.S. Department of Veterans Affairs, can occur after someone has gone through a trauma. While it’s estimated that 7-8 percent of the general population will have PTSD at some point in their life, the rates are significantly higher for veterans who have been through combat. Roughly 30 percent of Vietnam War veterans have PTSD, compared to 12 percent of those who served in the Gulf War, and up to 20 percent who served in Operation Iraqi Freedom and Enduring Freedom.

Trained service animals have been found to be a good form of treatment for those veterans who are suffering from PTSD. Couple that with the number of animals who are in shelters, and the program to train the dogs and place them with the veterans has created a win-win situation for both people and dogs. Being paired with a service animal often makes the difference in a veteran feeling comfortable even leaving his or her home.

“As a combat veteran, I understand the sacrifices that veterans make and the importance of making a difference in a veteran’s life when they are making the difficult transition to civilian life.  It’s an honor to be able to train these dogs and unite them with a fellow veteran,” explains Charles Jackson. “They have helped our Country and this is just one small way we can show our appreciation.”

Jackson is the owner of Blue Line K9 Services, a dog obedience training business in the  Hudson Valley. He’s a former police K9 handler, an Army veteran who served in Operation Desert Storm, and he currently supervises the City of Newburgh Police K9 Unit. He is a skilled and passionate dog trainer who provides basic and advanced obedience training, as well as service dog training, and is certified by the American Kennel Club as an evaluator.

For more information on Paws of War, visit the website at www.guardiansofrescue.org.

About Guardians of Rescue
Based in New York, Guardians of Rescue is an organization whose mission is to protect the well being of all animals. They provide aid to animals in distress, including facilitating foster programs, rehabilitation, assisting other rescue groups, and providing support to families, both military and not, who need assistance due to economic factors. To learn more about Guardians of Rescue, visit the site at www.guardiansofrescue.org.