Tritech, a developer that specializes in downtown revitalization, gave a presentation at the event. 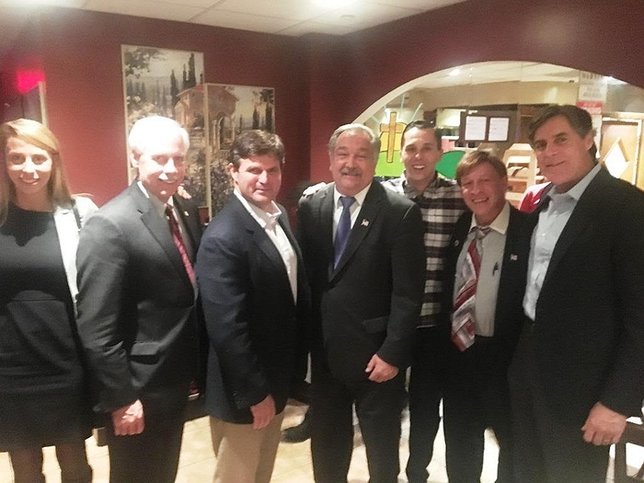 Photo by: Office of Legislator McCaffrey

Lindenhurst, NY - April 13, 2016 - At the latest meeting of the Lindenhurst Business Improvement District, Suffolk County Legislator Kevin McCaffrey (R-Lindenhurst) joined with his colleagues from local government and members of the community to discuss the revitalization of the Village’s downtown area. Those who attended heard an informative presentation by Tritech, a developer that specializes in downtown revitalization efforts here on Long Island.
With the booming success that followed the revitalization of Patchogue Village – which was a Tritech venture – many municipalities around Suffolk County have been considering similar undertakings. There is particularly a lot of buzz surrounding the concept of transportation hubs – planned neighborhoods with a close proximity to railroad stations and other access points to public conveyances.
According to some, the Village of Lindenhurst seems like an ideal candidate to bring about its own incarnation of a transportation hub. With its historic downtown area adjacent to the Lindenhurst station of the Long Island Railroad, Tritech explained how their vision for a robust and modern residential apartment complex may be the key to the revitalization that the area craves.
“Revitalization is inherently a multi-faceted endeavor,” said McCaffrey. “Smart planning is essential if we aim to maintain a high quality of life, sustain the economy, and protect the environment. We potentially have the ability to keep our young people here on Long Island and also have a place to work and shop nearby.”
Tritech noted that their plans for a residential community would not be mixed with commercial use. The idea is to draw people to the area and contribute to the existing downtown business district, which has ample room to grow.
“In order to plan in an intelligent manner, we need input from residents, business owners and civic leaders,” added McCaffrey. “We are looking to build a future that benefits everyone in the community, so their thoughts, concerns and ideas are critically important.”
For those interested in learning more about the Village of Lindenhurst, they are encouraged to visit its website.
Legislator McCaffrey represents Suffolk County’s 14th Legislative District which encompasses the Village of Lindenhurst, Babylon Village, the hamlets of West Babylon and North Lindenhurst, portions of Copiague, North Babylon, and Babylon’s barrier beach communities.