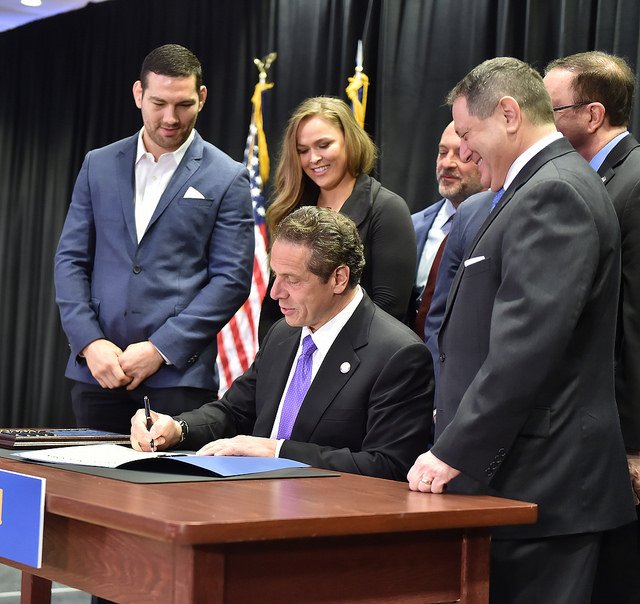 Albany, NY - April 14, 2016 - Following the Governor’s signing of this legislation, the Ultimate Fighting Championship announced that it will host a major Pay-Per-View event at Madison Square Garden on Saturday, Nov. 12. Additionally, UFC will be adding another live event in Upstate New York before the end of the year. The organization has pledged four events per year for the first three years after passage of the bill. The events will be held in Upstate cities such as Buffalo, Rochester, Syracuse, Utica, and Albany, in addition to Madison Square Garden and the Barclays Center.


“It’s time to bring mixed martial arts competitions to the New York stage,” said Governor Cuomo. “With venues like Madison Square Garden, New York truly is the international icon for great sporting events, and we’re excited to begin a new chapter of MMA in the Empire State. This legislation will make the sport a better sport for all involved, and bring new economic activity into arenas across the state, and I’m proud to sign it into law.”

Senate Majority Leader John Flanagan said, “Mixed Martial Arts will bring hundreds of millions of dollars in revenue to New York’s coffers and create well-paying jobs across the state. This is a win-win for both fighters and fans that will drive economic growth and boost tourism from Albany to Long Island. More than that, this bill will help safeguard the health and welfare of these professional athletes by establishing proper oversight through the New York State Athletic Commission. The Senate has fought long and hard to make MMA a reality, and I applaud Senator Joe Griffo for his tireless advocacy on this issue and Governor Cuomo for signing this bill into law.”

Senator Joseph Griffo said, “For years we were losing tourism and revenue as fans and fighters alike went to other states that had embraced MMA. Thankfully, starting today, those days are over. I'm proud to have led the fight in the Senate to bring MMA to the Empire State, and I want to thank Governor Cuomo, Leader Flanagan, Assemblyman Morelle, and everyone else who played a role in making today a reality.”

Assembly Majority Leader Joseph Morelle said, “By legalizing MMA, we are finally bringing this already popular sport into the mainstream. Now, New York State will be able to tap into the sport’s significant economic benefits, while at the same time standing up to better protect the health and wellbeing of its fighters. I was proud to lead this fight in the state Assembly for years, and I thank Governor Cuomo, Speaker Heastie, Senator Griffo and everyone else who has helped make today possible.”

Lorenzo Fertitta, UFC Chairman and Chief Executive Officer, said: "This is a great day for UFC and an even greater day for New York’s MMA athletes and fans. This was certainly a long time coming and there are too many people to thank at once, however, we would like to recognize Governor Cuomo, Senator Griffo and Assembly Majority Leader Morelle for their incredible effort in making this day a reality. Of course a big thank you also goes to the great fans of the State of New York. UFC is committed to having a major presence in New York over the next few years and we look forward to hosting world class events in New York City, Albany, Utica, Syracuse, Rochester, and Buffalo."

Ronda Rousey, former UFC Women's Bantamweight Champion, said, “Governor Cuomo, all the legislators who supported this and most of all, all the New York fans who made this happen, on behalf of all MMA athletes everywhere, thank you. I know this is a huge day for my fellow athletes from New York but this is also a big day for every professional MMA athlete from across the globe: if you can make it here, you can make it anywhere.”

Chris Weidman, former UFC Middleweight Champion, said: “As a lifelong Long Islander and New Yorker, I couldn’t be happier. It has forever been a dream of mine to fight at Madison Square Garden, the world’s most famous arena, and now that dream can finally come true. On behalf of all New York MMA athletes – professionals and particularly amateurs, who now know the sport will be safer – our thanks go to Governor Cuomo and all the legislators who made this happen.”

In addition, as a result of the Governor’s signature, the state will establish a study to evaluate potential funding mechanisms for providing lifetime care to competitors suffering from degenerative brain diseases resulting from injuries sustained in the ring.