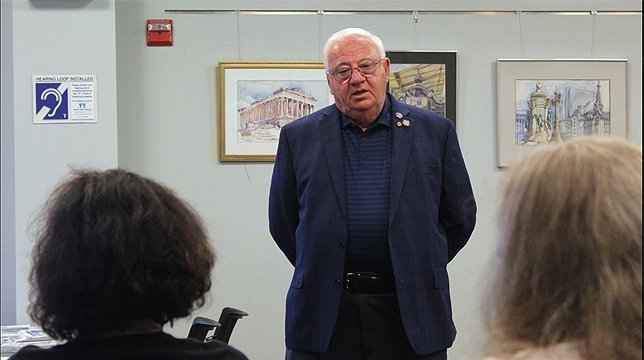 Long Island, NY - April 13, 2018 - New York State Senator John E. Brooks this morning called upon the NYS Department of Transportation to take swift steps to improve roadway safety on the Southern State Parkway, following a chartered motorcoach crashing into an overpass Sunday night. The bus, carrying returning high school trip participants and chaperones from JFK Airport to Huntington, crashed into the bridge over the Southern State Parkway in Lakeview. The crash warranted an initial “mass casualty incident” response by Nassau County emergency services and other first responders from surrounding areas.
The bus, restricted from entering onto the Southern State and with a height of 12 feet, attempted to travel under the overpass with a 7-foot, 7-inch clearance.
In a letter to the NYS DOT, Senator Brooks wrote, “This week, a tragic bridge strike occurred when a coach bus attempted to improperly pass underneath a low-height bridge. In order to reduce the number of bridge strikes, we must prioritize the installation of sensors on low-height entrance ramps. I thank Governor Cuomo for his leadership in dedicating $4.3 million to the installation of sensors at thirteen sites across Long Island.”
Senator Brooks added, “It is with immediate urgency that we encourage the expedited installation of the remaining eight sensors that would notify the driver that the height of the vehicle does not meet the needed clearance requirements for the overpasses on the roadway...we must take immediate steps to improve safety…and consider additional safety measures, such as clearance bars at the entrance ramps, which would be a low-cost supplement to the ongoing program.”
Senator Brooks was joined by other elected representatives of constituents who live near and frequently use the Southern State Parkway, including Laura Gillen, Supervisor, Town of Hempstead; NYS Assemblywoman Michaelle Solages, 22nd District; NYS Assemblywoman Christine Pellegrino, 9th District; and Debra Mulé, Nassau County Legislator, 5th District.
“The Southern State Parkway is the deadliest state parkway in the country and it happens to run right through the heart of America’s largest township,” said Town of Hempstead Supervisor Laura Gillen. “While our thoughts remain with the injured and we anxiously wait for the results of the Department of Transportation’s investigation, this highway remains unacceptably dangerous. I applaud State Senator Brooks and his office for pushing to make our highways and communities safer.”
“Accidents occur more frequently on the Southern State Parkway on Long Island due to its outdated engineering,” stated Assemblywoman Michaelle Solages. “New York State Department of Transportation and local municipalities must take a comprehensive approach in updating the exit and entrance ramps of the Southern State Parkway by expediting the installation of alert technology and other traffic control measures. This technology exists, let’s not nickel and dime the safety of our fellow New Yorkers.”
Assemblywoman Pellegrino said, "My thoughts are with the victims of this weeks’ Southern State Parkway bus accident. I’m praying they all make a full and speedy recovery. I am here today to call on The New York Department of Transportation to push up their timeline on the installation of sensors and alerts on the Southern State to ensure this kind of accident doesn't happen again. The Southern State Parkway is one of the deadliest roads in the country, with this stretch known locally as 'Blood Alley' and it's outrageous to me that's it's taken this long to address the low-standing bridge issue on the parkway, which has been a concern for decades. We are lucky that there were no fatalities this week, but we can't rely on luck alone, we need to act!"
“The Southern State Parkway is a source of grave concern,” stated legislator Debra Mulé, representative of Nassau County’s Fifth District. “Measures must be taken to ensure the safety of all residents while driving on the highway.”