Blue Angels Grounded for 2013 Due to Navy Budget Cuts

Fans won't be seeing the Blue Angels at the Memorial Day air show, but the squadron will continue practicing their maneuvers. 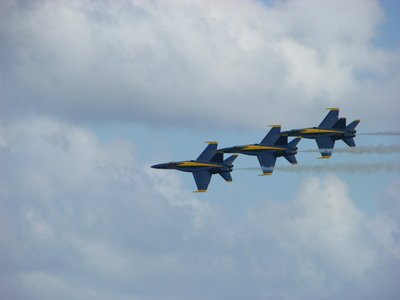 For the first time, Long Islanders will not see the aerial feats of the Blue Angels this coming Memorial Day, as the United States Navy announced Tuesday that they will be cancelling all Blue Angels Flight Demonstration shows for 2013 due to budget cuts.

Thousands of people typically attend the Bethpage Air Show at Jones Beach on Memorial Day Weekend to see the Blue Angels, as well as other performers, but the Blue Angels will be missing this year due to the Navy, Air Force, and federal government’s slashing $85 billion from the budget for the rest of the year.  Due to the cutbacks, the Air Force’s Thunderbird flight team will also not be performing for the rest of 2013.

"Recognizing budget realities, current Defense policy states that outreach events can only be supported with local assets at no cost to the government," said the office of the Commander Naval Air Forces in a statement. "This is one of many steps the Navy is taking to ensure resources are in place to support forces operating forward now and those training to relieve them."

According to the Air Force, each show can cost the base about $100,000. As a result, the Thunderbirds canceled over two dozen shows, and similarly, the Blue Angels will cancel 32 appearances.

Until the Navy has enough funding to let the Blue Angels back in the air, they will continue training at their base in Pensacola, Florida.

The 10th Anniversary Bethpage Air Show at Jones Beach will still go on, and though spectators may not see the Blue Angels, they can still see the Geico Skytypers, John Klatt, David Windmiller, The Warbirds, Sean Tucker, and many others.

The show brings in millions of dollars in revenue to Long Island each year, said Bethpage Federal Credit Union in a press release.