Guardians of Rescue, a nation-wide animal rescue organization, recently saved an unnamed and unclaimed dog from the harsh streets of New York City after being hit by a car and is now asking for donations ... 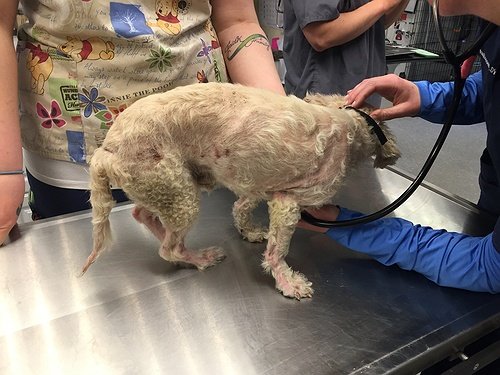 Smithtown, NY  - April 2, 2015 - According to the American Veterinary Medical Association, American households own almost 70 million dogs across the country. Unfortunately, one dog in New York did not have an owner, which led to his current sad predicament. Guardians of Rescue, a nation-wide animal rescue organization, recently saved an unnamed and unclaimed dog from the harsh streets of New York City after being hit by a car and is now asking for donations to help finance the suffering dog’s veterinary bills which include surgery and rehabilitation.
“The case of this small poodle was called to our attention by a police officer, who noticed a dog lying on the street. He immediately noted that the dog had been run-over by a vehicle, approximately 40 minutes earlier, and was severely injured,” says Robert Misseri, President of Guardians of Rescue. “He called us and we knew we needed to spring into action to save this dog.”
Guardians of Rescue, a nation-wide animal rescue organization located in New York, immediately took action to save the pup. The dog’s origin is unclear; he could have been abandoned, lost or stolen. The dog was lacking a microchip, which would have made finding his owner, if he had one, easier. Veterinarians concluded that he was suffering from:
The dog, now named Lambchop by the rescue organization, will be up for adoption, but the more pressing issue is to get him stable and comfortable and back to full health.
“Unfortunately, Lambchop will have to lose his leg to save his life. He has suffered greatly already in his life, but hopefully now he can turn a corner. With the community’s help, he can get the health care that he needs and be adopted into a loving family,” says Misseri. “We encourage anyone who can to make a donation to help this innocent dog live to see a brighter future.”
To learn more about Guardians of Rescue’s “Gimme Shelter” program or to donate to Lambchops medical bills please visit the Guardian's official site or their fundraising page for Lampchop.
About Guardians of Rescue
Based in New York, Guardians of Rescue is an international organization whose mission is to protect the well being of all animals. They provide aid to animals in distress, including facilitating foster programs, rehabilitation, assisting other rescue groups and providing support to families, both military or not, who need assistance due to economic factors. The mission of Guardians of Rescue is to facilitate and foster programs and activities that further the unique benefits of interaction between people and animals. They are all about compassionate action, about People Helping Animals and Animals Helping People. At its core, they are an animal rights and welfare organization whose members work to protect the wellbeing of all animals and their owners, and come to the aid of those in distress. To learn more about Guardians of Rescue, visit the site at www.guardiansofrescue.org.