Assemblywoman Kimberly Jean-Pierre announced that the 2016-17 state budget features several measures that will have a lasting impact on Long Island families. 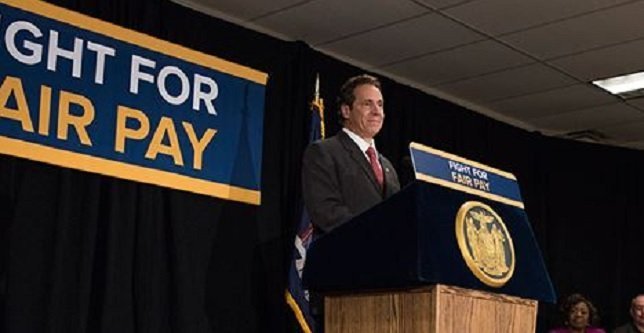 Governor Cuomo in December 2015 discussing his plans to make New York the first state in the nation to adopt a $15 per hour minimum wage.

These measures include historic investments in education and infrastructure, funding for drug addiction awareness and treatment programs and a higher minimum wage to help lift families out of poverty.

“We know how hard the people of New York State work to provide for their families,” said Jean-Pierre. “That’s why we’ve raised the minimum wage for all New Yorkers and ensured workers have access to paid family leave. These are essential to growing our economy and supporting the people of our state.”

The budget stipulates that the minimum wage will be increased to $15 per hour on Long Island by the end of 2021. This is a tremendous win for working families, noted Jean-Pierre. Other budget highlights include a paid family leave provision, which will allow workers up to 12 weeks of paid time off to care for a newborn or sick family member.

In addition, a tax cut for joint filers making less than $300,000 will provide much-needed tax relief to middle-class families and will continue growing the economy.

The budget makes significant investments in Long Island schools so that children can get the quality education they deserve. Education aid is increased by $1.47 billion and $433 million has been allocated to eliminate the Gap Elimination Adjustment (GEA), ensuring schools get the funding they are owed.

And to transform struggling schools into valuable neighborhood institutions, the budget provides $175 million for community schools. Community schools offer crucial services to students and their families and help fight the effects of poverty.

"Recognizing the growing problem of heroin and opioid abuse, Assemblywoman Jean-Pierre successfully fought to secure funding to help local organizations Lindenhurst Community Cares and Copiague Community Cares deliver informational programs and to help those struggling with addiction get the help they need.

“The heroin epidemic is tearing apart too many families and damaging the fabric of our community,” said Jean-Pierre. “That’s why we’ve made combating drug addiction a priority in this year’s budget.”

Long Island’s economy will also get a boost from funding to repair and invest in New York’s aging roads and bridges as well as public transit systems, noted Jean-Pierre. The budget provides $7.3 billion for the MTA’s multi-year capital plan (2015-19), which will fund improvements to infrastructure.