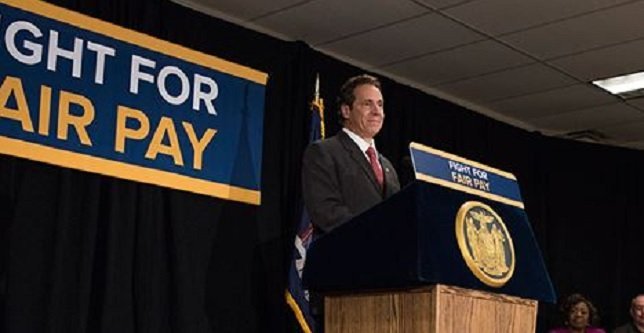 Governor Cuomo in December 2016 discussing his plans to make New York the first state in the nation to adopt a $15 per hour minimum wage.

Long Island, NY - February 10th, 2016 - Governor Andrew M. Cuomo today announced a report by the State Department of Labor (available here) detailing the impact of a $15 minimum wage for New York workers and their families. In total, 2.3 million New Yorkers will earn higher wages and as a result, increase spending power by more than $15.7 billion across New York State. The Governor is urging the State Legislature to pass his phased-in minimum wage proposal this session.

“If you work full time, you shouldn’t have to live in poverty – which is why it’s time for New York to lead the way and pass a $15 minimum wage,” Governor Cuomo said. “This report demonstrates that raising the minimum wage will provide new opportunity and restore economic justice to millions of New Yorkers. Our proposal will lift families out of poverty and create a stronger economy for all, and I urge lawmakers to help us fight for fair pay for working families this year.”

Governor Cuomo is leading the fight for economic justice by raising the wages of hard-working New Yorkers. Under the Governor's leadership, New York has successfully boosted pay for tipped workers and increased the minimum wage to $15 for all fast food workers, 10,000 state workers and 28,000 SUNY employees.

In 2013, the Governor successfully secured an increase in the state's minimum wage for all workers to $9.00. As a next step, Governor Cuomo is proposing to increase the minimum wage to $15, which would be the highest statewide minimum wage in the nation.

What a $15 minimum wage means for Long Island:


For a statewide breakdown, view page four of the minimum wage report.

The economic benefits of increasing the minimum wage outweigh the costs. But to provide businesses with the opportunity to plan, and in order to be sensitive to the relative abilities of different regional economies to absorb the change, the proposal phases-in the increase in New York’s minimum wage in New York City and more gradually in the rest of the state, on the following schedule:


Analysis: Raising New York’s Minimum Wage to $15 was produced by the New York State Department of Labor’s Office of Research and Statistics.


1. New York State Department of Labor analysis of data from US Census Bureau Current Population Survey and US Bureau of Labor Statistics Quarterly Census of Employment and Wages

3. The 1970 minimum wage adjusted for the rate of inflation through 2021, and for regional cost of living differences, is estimated at $16.05 in New York City and $14.41 for the rest of the state, according to the NYS Division of the Budget.