A public training on usage Narcan attracted a standing room only crowd in the Setauket Fire Department’s Station 3 on Thursday night. 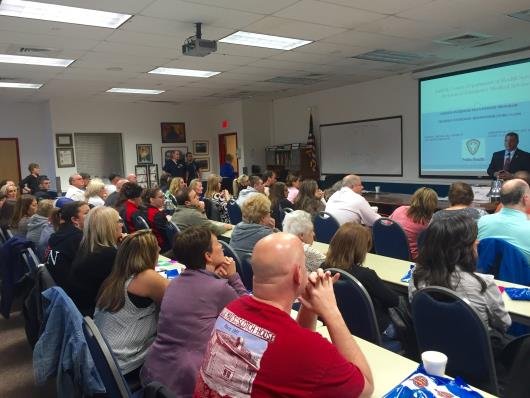 A public training on usage of Naloxone, the opioid antagonist commonly known as Narcan, attracted a standing room only crowd in the Setauket Fire Department’s Station 3 on Thursday night. The class attracted over 75 registered participants, with unregistered hopeful participants being turned away at the door, do to the unprecedented popularity of the event.

East Setauket, NY - April 1st, 2016 - A public training on usage of Naloxone, the opioid antagonist commonly known as Narcan, attracted a standing room only crowd in the Setauket Fire Department’s Station 3 on Thursday night.  The seminar presented by the Suffolk County Health Department, and sponsored by Legislator Kara Hahn and the Kiwanis Club of Three Village, was originally capped at 60 registrants in compliance with the room’s 70 person capacity.

Once the training began, however, that number had swelled to over 75 participants with some of the unregistered turned away in a sign of the growing public understanding of the opiate and painkiller epidemic seen across Long Island and the nation.

Turing the tide on opioid related overdoses in Suffolk has been a top priority for Legislator Hahn since taking office in 2012. During her first year, she sponsored legislation that equipped Suffolk County Police officers, who are often times the first responders to an overdose call, with Narcan so that aid can be given to victims quicker.

Additionally, she sponsored legislation that directed drug treatment referrals be given to individuals who received Narcan after an overdose.

In 2013, Legislator Hahn continued her leadership on this issue passing legislation that directed the Department of Health Services to become a certified training center for Narcan overdose responders.

This policy has given the Suffolk County Department of Health Services the ability to conduct trainings sessions that, to date, have educated over 5,155 residents on how to recognize an overdose and administer Naloxone.

For anyone who missed this training or was turned away, the Suffolk County Health Department will be hosting additional seminars during early April in Hauppauge, Sayville and Port Jefferson.  For additional information, please click here.