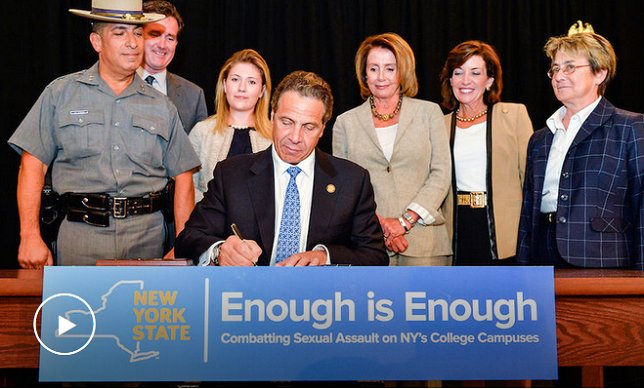 Albany, NY - January 27, 2016 - Governor Andrew M. Cuomo today announced a partnership between the New York State Department of Health and the State University of New York to help college faculty, staff and students identify sexual assault and interpersonal violence, as well as learn safe methods of intervention. This collaboration is the latest in a long line of efforts by Governor Cuomo's "Enough is Enough" campaign to end sexual violence on college campuses.

"New York is a national leader in the fight against sexual assault on college campuses and this new training further strengthens our efforts," Governor Cuomo said. "If we are to truly put an end to these very serious crimes, New Yorkers must not only understand how to protect themselves, but also know how to help when others are in danger."

The trainings utilize existing research related to sexual violence prevention on college campuses to teach bystanders how to intervene safely before, during and after an incident of sexual abuse, relationship violence, or stalking. Following these trainings, SUNY faculty and staff are certified to implement bystander intervention training programs and share their new knowledge and skills with the entire student body. These bystander trainings are made possible thanks to an existing $496,000 federal Centers for Disease Control and Prevention Rape Prevention and Education Program grant. All SUNY campuses are eligible to participate at no cost to the school.

SUNY Chancellor Nancy L. Zimpher said, "Through these training programs, we will provide students, faculty, and staff with new insight into how to recognize an incident of violence before it occurs and teach them a few actions they can take that may prevent it from happening. Thank you to Commissioner Zucker and his staff for their continued support and partnership as we work to prevent sexual and interpersonal violence on SUNY campuses and in New York’s communities."

New York State Health Commissioner Dr. Howard Zucker said, "The Department of Health is extremely pleased to support SUNY's efforts to prevent sexual and interpersonal violence on its campuses. Community attitudes play a significant role in its tolerance for sexual violence, and we commend SUNY for fostering a culture of nonviolence across their campuses."

In July 2015, Governor Cuomo signed the "Enough Is Enough" legislation to combat sexual assault on campuses statewide. Considered the most aggressive policy of its kind nationwide, the legislation requires all colleges to adopt a set of comprehensive procedures and guidelines, including a uniform definition of affirmative consent. The legislation also calls for a statewide amnesty policy that grants immunity to students who report assaults from campus rule violations such as those on drugs and alcohol. In addition, the policy calls for more law enforcement on New York State campuses, comprehensive training requirements for new students and partnerships with existing rape crisis centers.

Congresswoman Louise Slaughter said, "As one of the original authors of the Violence Against Women Act, I know that smart public policy can make a meaningful difference in all of our lives. Since its passage, we’ve been able to cut violence rates by more than half, but instances of assault on campuses are still far too common. That’s why I'm proud that New York is taking this important step forward for our communities."

Congressman Eliot Engel, a senior member of the House Energy and Commerce Health Subcommittee, said, "Sexual assaults on college campuses are among the most pressing issues facing our higher education system. I applaud New York State DOH, SUNY administrators, and Governor Cuomo for taking a proactive lead on this issue by using vital funding from the CDC Rape Prevention and Education Program to educate students on how to identify and safely intervene in instances of sexual assault. This is a critical first step towards ending the scourge of sexual violence that has plagued our nation’s colleges for too long."

Congresswoman Carolyn B. Maloney said, "I applaud Governor Cuomo and the SUNY system for their commitment to combating sexual violence on college campuses. This partnership between the Department of Health and the State University of New York will ensure that more students understand how to identify and intervene to prevent sexual assault and relationship violence, which have become far too prevalent on campuses across the nation."

Congressman Joe Crowley said, "Sadly, the incidences of sexual violence remain much too prevalent across our state - and there is no question that we need to continue to strengthen prevention efforts to help ensure the safety of New Yorkers, especially on our college campuses. That's why this collaboration between the Department of Health and the State University of New York is so critical. These new training programs will not only educate the college community and help raise awareness, but they will also help faculty and students effectively combat sexual assault whenever it takes place. New York has been at the forefront in the battle against sexual violence and I applaud Governor Cuomo for his continued commitment to making our campuses safer."

Congressman Paul Tonko said, "Students everywhere should be free to study and learn without fear of violence. This discussion is vital in helping survivors of these ugly crimes to overcome their challenges – and in preventing future violence from happening. I applaud the Governor, DOH, and SUNY for this collaborative effort, and look forward to working with them on a federal level to ensure we are doing everything we can to make our college campuses safer in New York State and beyond."

Congresswoman Kathleen Rice said, "This partnership will help equip school officials and students with the knowledge and skills they need to identify sexual assault, relationship violence and stalking and safely intervene to help prevent these crimes. Bystander intervention training is one of the most effective tools we have to combat sexual violence on college campuses, and this program will help ensure that parents who send their kids to school in New York can trust that they will be provided with a safe, secure and supportive learning environment."

For additional information on the "Enough Is Enough" campaign, visit online