Woman Struck and Killed By Vehicle in Great Neck

A woman was struck and killed by a vehicle that crashed into the AT&T store she was shopping in on Monday. 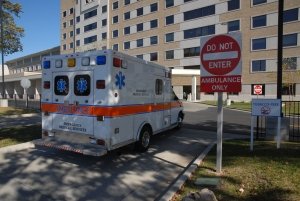 Photo by: Robert Linder via FreeImages

Update: Great Neck, NY - March 30, 2015 - The deceased victim has been identified as Lizabeth Sbar, 66, from Great Neck.
Original Release: Great Neck, NY - March 30, 2015 - The Public Information Office reports the details of a Fatal Vehicular Accident that occurred on Monday, March 30, 2015 at 10:51 am in Great Neck.
According to police, a 2006 Toyota Rav 4 driven by a 65-year-old female, struck and continued into an AT&T store located at 47 Northern Boulevard.  A 66-year-old female victim was injured and transported to North Shore University Hospital, Manhasset where she was pronounced deceased at 1:01 pm by emergency room staff.  The two additional victims suffered non-life threatening injuries. The driver and her 25-year-old passenger were not injured.
This investigation is ongoing.