Lavine: “I’m calling on Ed Mangano to take the steps necessary for Nassau County to prepare for the eventuality that many of our friends and neighbors will lose life saving health coverage." 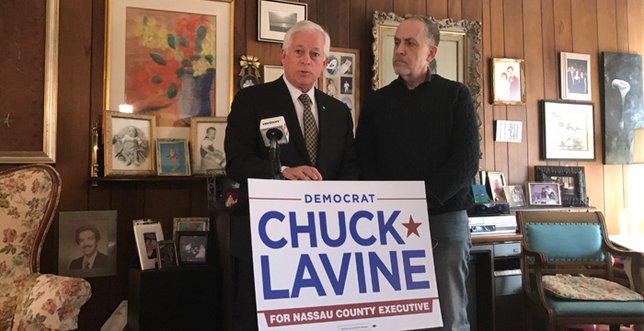 Chuck Lavine at the home of Gerry Laytin, 62, in New Hyde Park.

Photo by: Office of Chuck Lavine

Nassau County, NY - March 24, 2017 - Today, Democratic Candidate for Nassau County Executive Chuck Lavine called on County Executive Ed Mangano to order an assessment of the human effect of the Republican health care plan to repeal the Affordable Care Act in Nassau County.
Chuck said, “I’m calling on Ed Mangano to take the steps necessary for Nassau County to prepare for the eventuality that many of our friends and neighbors will lose life saving health coverage. That includes people like Gerry, who works hard to make ends meet and holds two part-time jobs to provide for himself and his aging mother. Gerry works nights and weekends. And if Gerry gets sick, the only obstacle standing between him and financial ruin is the affordable insurance coverage that he will lose under the cruel Republican plan. I disagree with County Executive Ed Mangano's dismissal of this as a ‘political’ issue. It’s personal. Just ask people like Gerry. He deserves better, and Nassau County deserves better.”
As the Republican plan is being debated in the U.S. House, Chuck highlighted that one million New Yorkers stand to lose coverage under their plan and costs will go up, especially for seniors. Chuck spoke at the home of Gerry Laytin in New Hyde Park. Gerry is 62 years old and cares for his 94 year old mother. Gerry works part time in retail sales, and teaches evening classes at Hofstra University.
Addressing the upcoming vote on the Republican health care plan, Gerry said, “The Republican health care plan would have significant negative consequences for me and my family. To President Donald Trump and County Executive Ed Mangano: if you truly care about people then show it in your actions and not just your words. Do something that would help people instead of ramming through a flawed plan that would strip out essential care. That’s not serving the people.”
Chuck Lavine is a Democratic candidate for Nassau County Executive. He has served in the New York State Assembly since 2005 and represents the 13th District which includes Glen Cove and portions of Oyster Bay and North Hempstead. In the assembly, Chuck is Chair of the Assembly Ethics Committee and Co-chair of the State Legislative Ethics Commission. Chuck lives in Glen Cove with his wife, Ronnie.