Suffolk County Legislator Kevin McCaffrey (R-Lindenhurst) recently had the opportunity to recognize Troop 179’s newest Eagle Scout, John A. Cuomo, at a Court of Honor held at Our Lady of Lourdes Church. 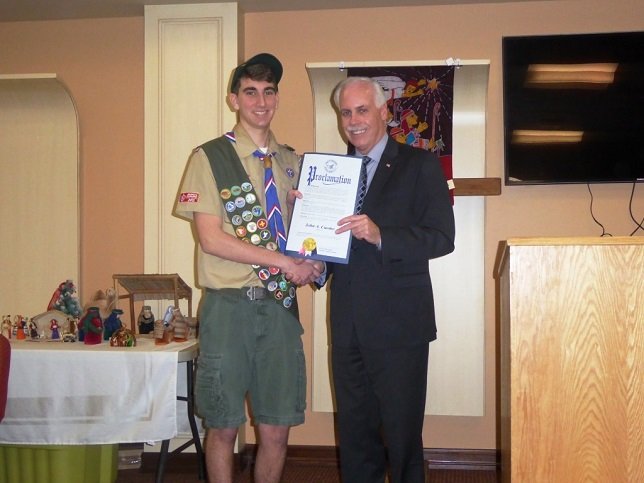 West Islip, NY - January 21, 2016 - Suffolk County Legislator Kevin McCaffrey (R-Lindenhurst) recently had the opportunity to recognize Troop 179’s newest Eagle Scout, John A. Cuomo, at a Court of Honor held at Our Lady of Lourdes Church.  This was a momentous event for John, who hails from West Babylon, and it was heavily attended by his family, friends, fellow scouts, and elected officials from state and local governments.

Achieving the rank of Eagle Scout is a high honor in Scouting, and it also carries with it the respect of the community – and for good reason.  The path to the Eagle Scout rank is an arduous one, even for the most dedicated of candidates.  All of the requirements of the Eagle Scout rank must be met before a candidate turns 18 years of age.  Therefore, in addition to earning the required merit badges and completing a substantial service project, the art of time management simply must be mastered.

For his Eagle Scout project, John chose to organize a blood drive which took place in January of 2015.  The month of January was chosen due to its being the time of year at which blood banks tend to experience critical shortages.  John’s hard work and determination led to a very successful drive which netted a total of 45 donations.

“Countless lives were no doubt saved by John’s efforts,” said McCaffrey.  “John is a role model for both young and old alike, and our community is truly fortunate to have such a leader.  When John completes his education, I certainly hope that he chooses to remain here in Suffolk County to continue his commitment to service.”

Currently, John is a freshman in St. John’s University pharmacy program, and he was very happy to report that during his first semester, he achieved a 4.0 GPA.  Based on his successes to date, John is sure to deliver more positive news in the very near future.