The penultimate day of my Long Island brewery adventure brought me to Greenport and Riverhead. 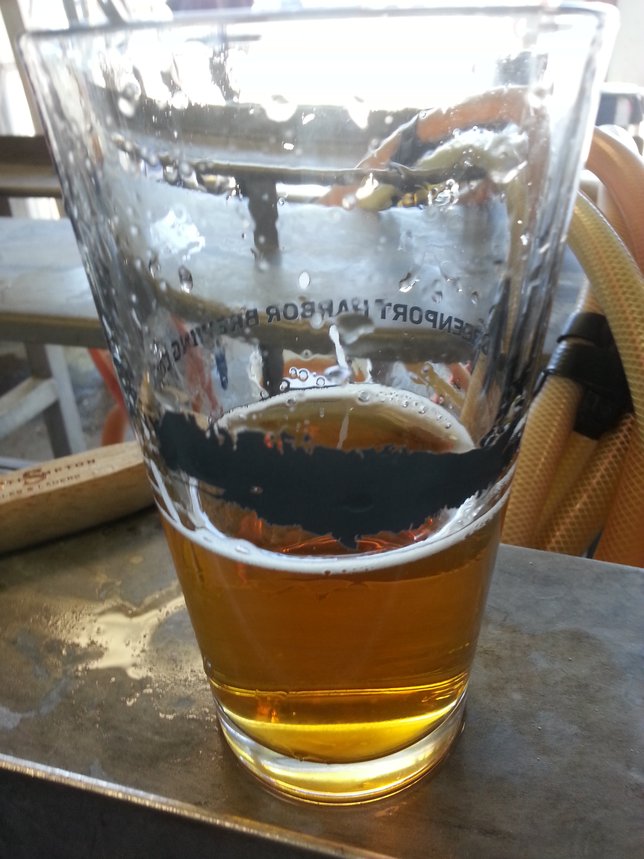 Yesterday was clear, bright, and quite cold. My weeklong plan had been to use Friday as a breather from the hustle and bustle of Western Suffolk and Nassau and head to the open road of the East End. I visited both Greenport Harbor Brewing Company and the Long Ireland Beer Company. Both operations do all of their brewing on site. It is certainly beautiful out there, with open farmland and frequent views of the Long Island Sound and Connecticut beyond. I certainly enjoyed the traffic-free drive.

Greenport Harbor Brewing is housed in a quaint restored firehouse just off of Front Street in Greenport. It's a lovely dockside village, far removed from the density of both construction and density further west on the island. I was thankful to take a breather. The brewhouse itself is indicative of the building's former status, with ornate ceramic work on the ceilings and walls, as well as old, stylized molding. According to DJ, the head brewer, the firehouse was badly burned by a fire in the past. Ironic, right? A firehouse burning down? These are the things that seem to happen in the name of beer. The building was then sold to a hoarder, who filled the structure with all kinds of junk. When he died, the family sold the firehouse to Greenport Harbor's owners, John and Rich. The structure then underwent a massive renovation, which included installation of large new red doors, which opens the downstairs area directly to the street. It's cozy, well-lit, and beautiful. The stainless steel brewhouse was installed, and the brewers got cranking on one of Long Island's best beers.

Speaking of the beer, I was fortunate enough to try the brewer's reserve beers. VIP treatment? I'll take it. First up was an unnamed Grape Ale, made from Sauvigon Blanc grapes provided by Martha Clara Vineyards in Riverhead. I am a huge fan of inter-industry collaboration such as this, especially between New Yorkers. This is a no-brainer. The product is fantastic. It has a champage-like delicacy, and slight sweetness from the grapes, which comprise around ten percent of the fermentable sugars. Beer and wine have a great deal in common, and this brew is an excellent reflection of this. If you're a wine person, you'll certainly like this. There is also a slight acidity that would complement seafood well. The beer has been cellar-aging since early 2012, which has provided balance as well as complexity. It's really, really good. Hopefully, some of the hand-bottled brews will make their way out into the world for your enjoyment. Next up was the Hammer & Sickle Imperial Stout, Greenport Harbor's interpretation of a Russian Imperial. Oh my. This beer is dark and night, with a khaki colored head. DJ believes in the purity of beer, and notes that the craziest thing in this stout is Vienna malt. Nothing ridiculous, just the four simple ingredients beer needs: malt, water, hops, and yeast. The product is proof positive of this philosophy. Hammer & SIckle is full-bodied, rich, and delicious.

DJ and Greg, the other head brewer, proceeded also to drop some big news on me: Greenport Harbor is hard at work on a brand-new 30 BBL system just down the road from their current brewhouse. They are retrofitting an old car dealership to serve as the main brewing space for the company, and will be effectively doubling their capacity, becoming one of the largest volume brewers on the island. The rise and rise continues. Be sure to visit these guys soon, as the town is cool, the brewers and employees are friendly, and the beer is fantastic.

Check back later for the second part of my big day on the East End of Long Island, which was my visit to the Long Ireland Brewery. Be sure to follow me live on twitter, @InTheNameOfBeer on my nearly-finished #LIBrewTrip. Visit my website, In The Name Of Beer for my latest musings.